Hot on the heels of the awesome short prequel No Tomorrow comes the announcement that Turbo Kid 2 is officially in the works! I know, right?

Turbo Kid co-directors Yoann-Karl Whissell, Anouk Whissell, and François Simard (known collectively as RKSS) directed the short, which charts Apple’s (Laurence Leboeuf) journey that leads to her meeting The Kid. The filmmakers recently talked to Journal de Montreal, revealing that they are moving ahead with Turbo Kid 2, which will take place immediately after the events of the first film.

“It will be a direct sequel to the first film, taking action where it ended,” Yoann-Karl Whissell confirmed, adding that “in an ideal world,” they would begin filming in summer 2017.

Journal de Montreal reports that although nothing has been confirmed, original stars Laboeuf and Munro Chambers – who played The Kid – have both expressed their enthusiasm to reprise their respective roles. 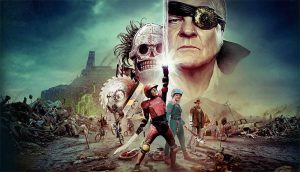 “We launched this video to show people that the universe [of] Turbo Kid is still alive. And it is clear that people have not forgotten us,” Whissell said of No Tomorrow.

Get out your Gnome Sticks and file this one in the ‘most anticipated’ pile.