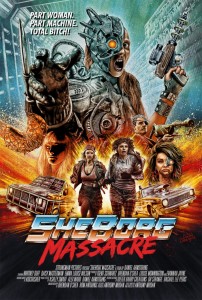 Strongman Pictures have announced the “intergalactic premiere” of Daniel Armstrong’s SheBorg Massacre, which will take place on 4th July at the Lido Cinema in Melbourne. This nutty slice of Ozploitation has also been given a typically awesome poster by The Dude Designs, as well as this sense-assaulting trailer.

Armstrong is becoming known for such cheapo antipodean insanity, having directed Roller Derby/demons flick Murderdrome, Metal Muder 3D and last year’s Fight Like a Girl. No news yet as to when audiences outside of Australia will get to see SheBorg Massacre, but for now, read on for all the details from the press release, and drink in the beauty of this poster.

Self styled tough-girl and punk activist Dylan loves fighting for a cause… literally any cause will do (much to the chagrin of her BFF Eddie). When an alien fugitive crash lands into a local puppy farm and begins turning people into machines that feed on puppy flesh, Dylan has to decide if she believes in any cause enough to risk her life, take on the SheBorg menace, and save the world.

SHEBORG MASSACRE is the third do-it-yourself feature film to come from writer/director/editor Daniel Armstrong’s Strongman Pictures Entertainment. It follows in the footsteps of the international cult hits MURDERDROME and FROM PARTS UNKNOWN: FIGHT LIKE A GIRL.

The shoot consumed 32 days, spread part time over 4 months, and demanded a huge commitment in time and energy from the all volunteer cast and crew. SHEBORG MASSACRE’S INTERGALACTIC PREMIERE crash lands to Earth on July 4th, exactly one year from the first day of shooting.