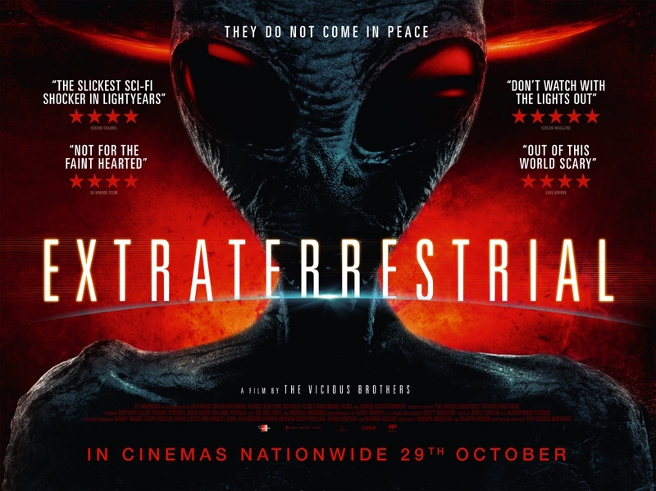 Synopsis:
Don’t go shooting aliens – they really don’t like it!

Those expecting to get weepy at cow eyed, crease faced, two foot tall aliens wanting to borrow a mobile to phone home are likely to be sorely disappointed with this. Perhaps the most obvious pointer is that the directors behind this are The Vicious Brothers ( who aren’t brothers and I would wager are probably a credit to their mums) whose previous film was the decent little shocker,  ‘Grave Encounters’ featuring a TV ghost hunting team trapped in a disused asylum.

Continuing with the isolated venue motif they take five students who on a weekend break in a lone log cabin in the woods. Brittany Allen as April is there primarily to collect some items before the cabin is sold to fund her parent’s divorce but they take the opportunity to indulge in the obligatory student drink and drugs fest. Having earlier stumbled across  Michael  Ironside as an ex Vietnam Vet  family friend now reduced to a cannabis cultivating UFO –ologist  who tells them about a  treaty between the governments of Earth and the aliens that they won’t kill each other as long as the aliens keep a low profile as they go about harvesting animals for their tests. So loaded on low-cal lager and heavy ganja bush weed they find  an alien stalking them outside and in the name of peace and goodwill they duly shoot it dead instigating a house invasion as the almond eyed, lanky lurking aliens go out for revenge against the five fearful students.

Ostensibly a house invasion / alien abduction mash-up it fails to avoid the hoary old genre cliche’s  (revelatory facts emphasised by crashing lightening, firing a gun indiscriminately at an unseen foe, and even lines such as, ‘I’ve seen a lot of good men die…’ etc) and its populated by the stock characters  you’d expect but this is competently made and there are flashes of inspiration and a sense of unease that keep this moving along punctuated by some extreme moments (one character blows his head off with a shot gun) Though they can’t resist an anal probe sequence they do buck the Hollywood trend  and have the confidence to ensure a suitably grim and downbeat ending  finishing with a technically excellent final tracking shot enough to show that they’ve got an assured future in horror. It’s unlikely we’ll ever see a Vicious Brothers Chick Flick.