Extended Trailer for GODZILLA KING OF THE MONSTERS

So much incredible footage was released for Godzilla: King of the Monsters at San Diego Comic-Con in conjunction with Warner Bros powerhouse panel at prestigious Hall H, you may still be unpacking it all. You caught the teaser but did you see the full trailer? You’ve seen the trailer, but did you visit the viral Monarch Sciences website to review the stats of ever “Titan” set to appear in the film?

Thankfully, the folks at Movie Access Trailers have assembled all the Comic-Con footage into a single 4-minute kaiju-sized trailer! Give it a spin below. 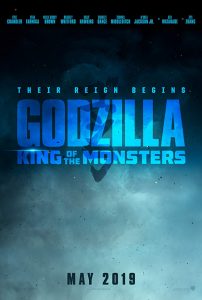 Synopsis:
Humanity’s existence hangs in the balance when the mighty Godzilla collides with Mothra, Rodan and the three-headed monster King Ghidorah.

Godzilla: King of the Monsters is directed by Michael Dougherty and stars Bradley Whitford, Millie Bobby Brown, and Vera Farmiga. It’s a sequel to both 2014’s Godzilla and 2017’s Kong: Skull Island and paves the way for a final epic throw-down in Godzilla vs Kong in 2020.