As you’d probably expect from the director of delights such as Irreversible and Enter The Void, the trailer for Gaspar Noe’s next endeavour Climax is quite something.

The trailer is filled with trippy visuals, psychotically enchanting images and a brain-pulsing soundtrack. It looks like a deadly dance-off and we can’t wait to be a part of it. 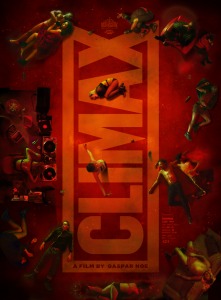 The elusive synopsis tells us all we need to know about Climax:
“Birth and death are extraordinary experiences. Life is a fleeting pleasure.”

Climax will premiere at the upcoming Arrow FrightFest and will, neatly, be the festival’s closing film on Monday 27th August. Not long now.

A24 will release Climax this Autumn and we know we’re going to in for one hell of a treat when they do.