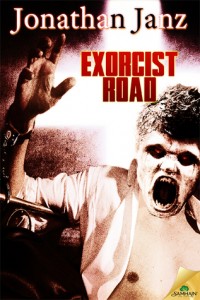 Exorcist Road is a tale of demons and murder, told through the eyes of priest Jason Crowder, a self-confessed coward who entered his chosen vocation because he was scared of the world, particularly women. So the vow of celibacy was a natural step for a man who just wanted to hide from certain aspects of life.

Everything is about to change though for our hide away priest when Officer Danny Hartman knocks on his door one night and asks him to bring his bible, and anything else you guys use in a special situation.

Add to that a side order of serial killer known as the sweet sixteen killer, who as the name suggests kills sixteen year old girls and the stage is set for page turner that most will struggle to put down.

Exorcist Road was my first read by Jonathan Janz and this was a frenetically paced horror thriller that never takes its foot of the gas, the tension never subsides and as stories go, this flows like a trip down the rapids gripping on for dear life.

If I had any criticism at all it would be that the story reads somewhat like a film, there’s lots happening, plenty of action, twists galore and different characters that all contribute to the story but I never really felt any of the characters, never really loved or hated any of them. It’s one of those stories you just buckle in for the ride and let it take you.