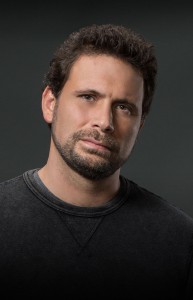 There’s no denying that Jeremy Sisto has challenged himself with all manner of roles ever since he started acting in 1991. We’ve seen him as an affluent brat in Clueless and a bipolar artist on Six Feet Under. He even played Jesus in a 1999 TV mini-series but most SCREAM readers will probably best remember him as poor old Scott in Wrong Turn or the man of Angela Bettis’ dreams in Lucky McKee’s May.

Aside from acting, Sisto has also dipped his toes in the music industry and released a solo album in 2012 under his alter ego, Escape Tailor, who he describes as “someone who lives wholly in the present, unburdened of social norms and deeply tethered to his own flawed humanity.”
Right now he can be seen as Dr. Peter Lattimore, the shoulder for everyone to cry on, in A&E’s latest television series The Returned and his latest film, Adam Mason’s Hangman, just world premiered at this year’s SXSW film festival. SCREAM’s Howard Gorman caught up with Sisto in Austin to find out all about his latest feature where he revealed that this could well be the start of an all new horror franchise, if everything goes to plan…

SCREAM: So you just watched the world premiere with an audience at SXSW. Did everyone jump when you expected them to and how has the feedback been?

Jeremy Sisto: It’s always fun to see it in front of an audience for the first time because you find some moments that you didn’t realise were as scary as they were and some that were funnier than you remembered them to be. But also it’s a very dark movie with a very dark ending and the overall feeling was that it really got under people’s skin.

SCREAM: So what was so special about this project had you clamber aboard, not only as an actor, but also as a producer?

JS: I wanted to work with Adam Mason and Simon Boyes and what I hadn’t seen before was a found footage/low budget film that was able to use a serial killer and everything that entails and that was exciting to me and I thought it could make for a series of movies. The script that they wrote was about family life and stuff that I could relate to and it felt like it was something that would be strong and creatively something I wanted to get involved in and so we went from there.

SCREAM: Were you familiar with Adam’s previous films and how did you come across the script?

JS: I’d known Adam just through mutual friends and he actually did a music video for one of my songs for my alter ego and he was able to come over and, just with a very small amount, make something very visually stimulating and interesting. It just made me feel that he had something that I would really love to work with. Scripts can be very dry and difficult to read but with their script they were able to really visualise the story that they were telling and it was a real page-turner, which is rare. So for all those reasons I wanted to work with them and we had a great connection and we hope to do it again.

SCREAM: This is a found footage film and you must be aware that there are a lot of people fed up with this subgenre now. It’s always going to be a bit of a risk to release another found footage film so what is it about this one that stands out from the pack?

JS: Yeah, found footage is a dangerous term to throw around these days as people associate it with one person holding a camera and there’s the question as to why the guy continues filming with all the things that are going on. The difference here is that the film was filmed by the serial killer himself as he documents the horror that he is creating for the family. So in the end it cuts together like a real movie as he has all these hidden cameras all over the house and so it doesn’t feel exactly like a found footage movie and I use that term delicately. But it does have something that applies to today’s technology and also has a feeling of being something that you could find on your own instead of something that was made by a studio just to scare you. You really get this sense as though this thing really happened.

SCREAM: It is said to be based on actual events. How closely based is it to something that actually happened?

JS: Yeah, it’s kind of loosely based on something. There was a story that came out around the time that we were developing this where a family found that a man had been living in their floorspace for years and they had had no idea and we certainly drew inspiration from that.

JS: Well we only had like three cameras so we could do three rooms at the same time. So what we would do was a whole sequence of scenes in that area with those cameras and then we would change the cameras around and do a different sequence in the house. It was pretty fun to do because we got to do entire sequences in all the different rooms whereas usually you would have to break sequences up into smaller bits.

SCREAM: And there are a lot of scenes with you in the dark and asleep with someone watching over you. Did Adam ever try and surprise you to make things feel more realistic?

JS: He didn’t but I’m sure he thought about it, but he never pulled one over on me. It’s a good idea though so maybe for the sequel. We hope there will be a whole series of these movies because it’s a concept that enables you to be able to tell a lot of different stories. It’s a pretty open concept and however the film is released we are hoping that it’s supportive of a future series.

SCREAM: The film is definitely carried by yourself and Kate Ashfield. Did you spend a lot of time together to create your backstory?

JS: Well we clicked pretty much right away. For this first film Adam, Simon and I wanted a family that was really relatable and didn’t have a tonne of secrets and hidden agendas. So it wasn’t like there was too much character detail to do and we just wanted to play a good family, good parents that loved each other and it’s the kind of a family that you’d look to and say, “You know what? That’s a good model of an American family.”

SCREAM: Did you do much research into how parents have reacted in real life home invasion situations to prepare for the role?

JS: The creepy thing about this particular one is that there is a large period of time that they don’t realise that somebody is in their house. What the guy did was he sees a family arrive at the airport and park and get all of their luggage so they are obviously going on vacation. He breaks into their car and pushes the home button on their GPS so he knows where they live and knows they’ll be out of town for a while so he goes to their house and breaks in and sets up shop there. Then, before they return home, he trashes the place to make it look like a break in. So the film starts out that the family is unsettled and once they clean up the house and the cops come and check everything they go back to their business and don’t really know that this guy is still living with them. So in this movie the reaction from the family is that they really move on with their lives so there wasn’t really much research done for this one but for future instalments there probably should be. 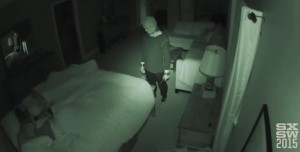 SCREAM: Apart from Hangman you have now returned to cable television with The Returned. How has it been going back to cable for the first time since Six Feet Under?

JS: It’s really good. I like not having to worry as much about tempo and pushing the comedic or dramatic plots. With this kind of stuff it’s more vital to make the characters intriguing and to make the moments feel very real and motivated. Then I have a movie called Break Point coming out this summer or fall which I also produced and co-wrote. I’m pretty excited about that one. It’s more of a comedy but then I have another horror movie coming out called The Other Side of the Door which is a Fox movie about ghosts. After that I’m also hoping to direct my first movie this year which will most likely be a thriller, but more on that later…

SCREAM: Thank you so much for speaking with SCREAM Jeremy. We really appreciate it.

JS: I really appreciate it too. Thank you.

We’d like to thank Jeremy for speaking to SCREAM and we’ll leave you with the SXSW trailer for Hangman: