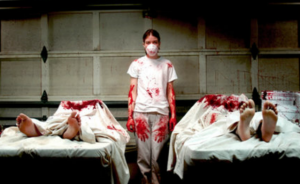 Pauline is a teenage outcast, shunned by peers, teachers and parents alike. She is a girl with dreams and ambitions, however those dreams are dreams filled with gore and sex, and her ambitions follow suit with aspirations to become a surgeon, and sleep with the boyfriend of her mean girl rival. Pauline’s true rival is her mother, who wants to mould her daughter into something respectable. Excision is a tale of fraught relationships and teenage dreams that border on nightmares.

The 2012 directorial debut of Richard Bates Jr., Excision is a film that takes tropes more common in films like Mean Girls and Clueless and shows them through a lens of gory body horror. Like Pretty in Pink if it were Pretty in Blood Red. It’s a mash up of genres that, surprising to some, actually works quite well. Excision isn’t just an homage to horror and high school movies, it becomes it’s own vision in the process.

While Pauline is a teenage misfit, she isn’t just some lazy archetype with tied back hair and glasses. She sports painful looking acne, and wild hair, she loves books but she’s not a shy bookworm. She’s brazen and blunt. She knows what she wants and she doesn’t care what others think, abrasively so. The majority of people in the film do not like her and that doesn’t phase her. She’s a powerful character, even if she’s no role model. AnnaLynne McCord dominates this film in her portrayal of Pauline.

Excision’s supporting cast is impressive and has a large number of recognisable faces. Pauline’s parents are played by Robert Bart (Hostel 2) and Traci Lords (Blade). The faculty in her school include Malcom McDowell (A Clockwork Orange), Matthew Gray Gubler (Criminal Minds), and Ray Wise (Twin Peaks). Pauline’s priest is John Waters (Pink Flamingos). Waters, in particular, seems to have influenced Bates’ style. Pauline’s fantasy sequences are tinted with a mixture of gruesome gore, perversity, and a sense of style. While reality Pauline is unremarkable, fantasy Pauline is a blood-soaked goddess.

The fantasy elements of this film are definitely detached from reality, yet it has this universal connection to anyone who was an awkward teenager. It’s the visual representation of hormone-induced puberty madness. Pairing it with the portrayal of a hellish school life and the battle at home between Pauline and her mother Phyllis, some might find Excision’s tale close to their own teenage experience.

The fractured relationship between mother and daughter is particularly poignant, Phyllis just wants to be a good mother unlike her own abusive one. That goal has made her domineering, leading only to frustration between her and Pauline who is damaged and acting out instead of seeking help. 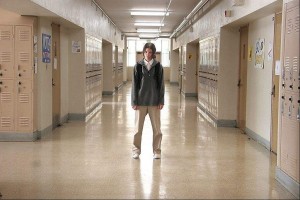 It’s the “damaged” side of Pauline that leads to the one problem I have with Excision. At one part, before the gruesome climax, Pauline has self-diagnosed that she has Borderline Personality Disorder. The film also references Pauline’s possible mental illness in her scenes with John Waters. Pauline has been sent to see her priest rather than a psychiatrist because her parents can’t afford it. While it is true that mental illness that is left untreated can lead to violent behaviour, it’s a fact that has been used in countless horror films as a lazy attempt at motivation for horrendous acts. It’s something that I find irksome, especially due to the lack of positive representation of mental illness in the horror genre.

Regardless of that argument, Excision is still a very entertaining film. It’s got that viciousness that seems to be lacking in modern mainstream horror films that is much more prevalent in more indie horror, in films like The Loved Ones and American Mary. If you want your teen movies grim and gory, this is the film for you.