After making a strong impression at Sundance this year, comedic shocker Trash Fire will be released later this year through Vertical Entertainment. A poster for the film has just been put out, and by God it’s a beauty. 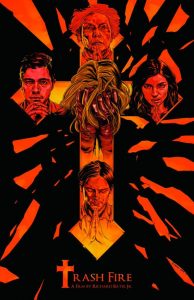 Trash Fire is directed by Richard Bates Jr., who burst onto the horror scene with his outstanding feature debut, feminist shocker Excision in 2012. His follow-up was 2014’s Suburban Gothic, which featured within its impressive cast Jeffrey Combs and John Waters.

This time around, the John Waters connection comes courtesy of leading man Adrian Grenier, who starred in the Pope of Trash’s own Cecil B. Demented. Starring alongside Grenier are Angela Trimbur (Halloween II, The Final Girls), Fionnula Flanagan (The Others), Ezra Buzzington (The Hills Have Eyes, Fight Club) and screen veteran Sally Kirkland (JFK, Two Evil Eyes).

Synopsis:
When Owen is forced to confront the past he’s been running from his whole adult life, he and his girlfriend, Isabel, become entangled in a horrifying web of lies, deceit, and murder. You’ll laugh. You’ll cry. You’ll be scarred for life.