Evil is Trending in the Poster for Friend Request

UK readers will recognise the following film, because it was released over here last year. However, the film is only just making its way stateside for a release on 22nd September; a year after it originally planned to do so. What was the hold-up? 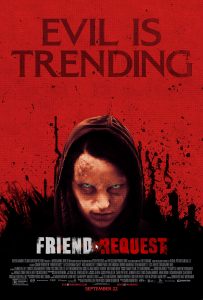 Check out the new poster for the film which teases “Evil is Trending”. It certainly does in Friend Request. The poster bears a striking resemblance to Evil Dead with its similar choice of font and blood-red colour palette. We’re sure originality isn’t dead.

We thought Friend Request was a timely, but relatively scare-less feature, even though it does well to paint the internet as a scary place. You can check out our review here.

If you haven’t seen it already, be sure to catch Friend Request next month.