EVIL LURKS IN HIS HOUSE’S TRAILER 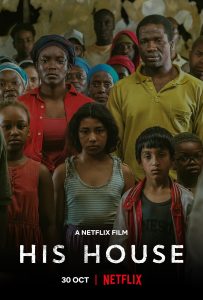 Netflix has debuted an official trailer for His House, a new horror-drama from director Remi Weekes that premiered at the Sundance International Film Festival earlier this year.

In the film, a young refuge couple who made a harrowing escape from war-torn South Sudan struggles to adjust to their new life in a small English town that has an unspeakable evil lurking beneath the surface. Ṣọpẹ́ Dìrísù (Humans), Wunmi Mosaku (Lovecraft Country), and Matt Smith (Pride and Prejudice and Zombies) star.

In addition to directing, Weekes also wrote the screenplay for His House, from a story by Felicity Evans and Toby Venables. The film comes home to Netflix on October 30th—so lock the doors and check out the trailer below.