Evil Lives in this New Poster for Havenhurst 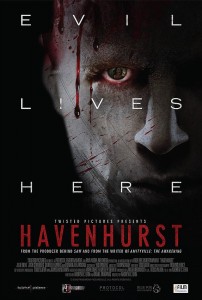 An evil and blood-splattered poster has been unveiled for Havenhurst, which follows a young woman who must confront a malevolent force in an apartment building. It stars Julie Benz, Fionnula Flanagan and Belle Shouse. The poster is appropriately dark and hints at the terror within the building. It also features the much-loved idea of placing large font over a face – like most Matt Damon films.

You can also check out the trailer for the film below which is drenched in gothic dread, with shadows lurking around every corner. It’s suitably sinister, spooky and filled with supernatural goings-on that will pave way for plenty of jump-scares.

Havenhurst is directed by Andrew C. Erin with the script being written by himself and Daniel Farrands. At the moment the film has a release date slated for 2016 in the USA, so keep your eyes peeled for a specific announcement.