Evil is Real in the New Trailer for Halloween

A brand new trailer has been unveiled for the upcoming Halloween reimagining and it looks brilliant. There’s one shot in particular that is absolutely glorious. Look out for the tracking shot of Michael Myers as he enters the house near the beginning. I just hope the full film has more of these intense long-takes.

I’ll also never get sick of hearing that skin-prickling new score by John Carpenter. Is it October yet? 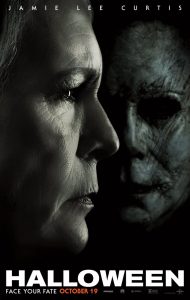 Synopsis:
Laurie Strode (Curtis) comes to her final confrontation with Michael Myers (Nick Castle), the masked figure who has haunted her since she narrowly escaped his killing spree on Halloween night four decades ago.

Halloween stars Jamie Lee Curtis, Judy Greer, Virginia Gardner and Nick Castle as Michael Myers AKA The Shape. Be sure to catch Halloween when it is unleashed on 19th October 2018.