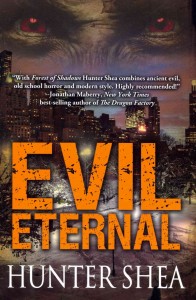 Evil Eternal is an old-fashioned tale of Good vs Evil. We have the good represented by Father Michael, an immortal priest. The evil is represented by the demon, Cain (yes, the Cain who murdered his brother in the Bible.) The two warriors have clashed many times throughout human history leaving behind death and destruction every time they fought. After a brief set up, the storyline takes us to the resurfacing of Cain after many dormant years, as he is eagerly beginning a killing spree and setting out on a wider mission of destruction. The Vatican, after finding out about Cain’s return, send Father Michael to track him down and vanquish him once more. Following an excellent brutal first clash in rural Vermont, the action switches to New York City.

The book is light on the religious aspects and is pretty much two super-powered combatants going at it and causing lots of collateral damage. Cain, the demon, has some fascinating powers. The most interesting is the ability to literally wear the skin of other people as a disguise. He is snide, arrogant and has a black sense of humor – an enjoyable character, dripping with evil. Father Michael is the strong, silent type, physically and visually imposing. There is not much charisma or, in fact, dialog from him. The old adage “still waters run deep” applies to Father Michael as he bears the heavy weight of innocents who have perished due to his and Cain’s conflict. The priest has his own powers, such as the ability to heal and super strength, as well as an array of gadgetry. You have to laugh a bit at the crucifix throwing knives and trident. Father Michael’s sidekick, the homeless artist Shane, has an unusual divine gift himself.  He provides the color and quick comebacks. Shane’s girlfriend, Aimee, the damsel in distress, plays her part as bait well. The men’s emotional connections to her are manipulated by Cain to draw the protagonists to him.

The plot is straightforward, leading the main characters inexorably to each other for a much anticipated final conflict. When Cain takes over the body of the Mayor of New York things really get interesting. He assembles his twelve demonic apostles and faces off against Father Michael and Shane. What follows is an exciting and blood-soaked finale.

Evil Eternal is good fun and doesn’t take itself too seriously. It’s a quick read full of plenty of gore, not likely to keep you up at night, preferring action over scares. It is entertaining if a bit shallow.