One of the most anticipated horror films of the year, Evil Dead Rise is set to hit theatres this April—and the official poster and trailer bring the horror home. 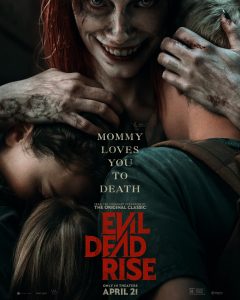 In the fifth Evil Dead film…

“A road-weary Beth pays an overdue visit to her older sister Ellie, who is raising three kids on her own in a cramped L.A apartment. The sisters’ reunion is cut short by the discovery of a mysterious book deep in the bowels of Ellie’s building, giving rise to flesh-possessing demons, and thrusting Beth into a primal battle for survival as she is faced with the most nightmarish version of motherhood imaginable.”

Lee Cronin (The Hole in the Ground) directed Evil Dead Rise, which stars Alyssa Sutherland (The Mist), Lily Sullivan (Picnic at Hanging Rock), Gabrielle Echols (Reminiscence), Morgan Davies (The End), and Nell Fisher (Splendid Isolation). Sam Raimi, Bruce Campbell, and Robert Tapert produced the film and are said to have been “very involved,” though Campbell’s iconic character Ash Williams will not be making an appearance.

Evil Dead Rise releases exclusively in cinemas on April 21st, 2023. Check out the terrifying trailer below!