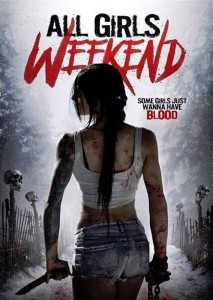 These are two films you’d probably never expect too meet, but this trailer for All Girls Weekend embraces the desolation and desperation of The Revenant and splashes in a good helping of Evil Dead terror.

The film follows a group of women who try to rekindle their friendship by embarking on a weekend in the mountains. However, events take a turn for the dramatically worse when they get lost and are forced to battle elements, including an unseen force that seems intent on making their trip as hellish as possible.

Take a look at the trailer below which shows the group battling the threat of hypothermia and an ominous rustling in the trees that spells trouble. The best part of the trailer comes with the first few seconds where an impressive array of horror posters are seen gracing the walls… Very meta.

All Girls Weekend stars Jamie Bernadette, Katie Carpenter, Gema Calero, Sharron Calvin and Karishma Lakhani. You can catch the film on VOD on 12th July and on DVD on 6th September.