Perhaps ‘hero’ is too strong a word, but certainly what Evil Dead superfan Mike (just Mike) is doing is worthy of our undying respect. Mike runs EvilDeadWorkshed.com, from where he sells his own replica prop chainsaws. Available from his shop are the ‘Groovy Edition’ and the ‘Witch Carver Edition’, but he’s currently got a bigger project on the go.

Having made contact with the owners of the site (in Wadesboro, North Carolina) where Evil Dead II was filmed, Mike has set about salvaging and restoring horror’s most famous cabin in the woods. The land owners recently alerted Mike to the fact that they “…will be clearing the area where the cabin ruins are located in order to harvest the trees for local firewood businesses.” Upon hearing this news, Mike knew what must be done.

“After having a long conversation with the owners,” Mike explains, “I have been given permission to come to the site and remove ANY and ALL Evil Dead II structures that are able to be saved prior to the devastation of the site area.” These include the roof and exterior of the workshed where Ash set about carving up Linda, a break-away ‘Ram-O-Cam’ door and a foam tree. The cabin itself is being taken away in pieces, having collapsed in 2014 due to a “…micro burst that hit [the] property“. The workshed’s frame was so rotted and damaged by termites that Mike opted to leave it behind, and is building a new frame on which to attach the original outer walls. 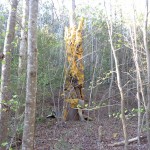 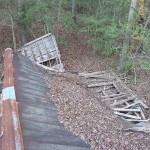 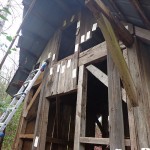 Mike wants to bring the project to as many fans as possible, explaining: “I am not making any money off of this. I spent a shit load of money to do this. I’m doing this for everyone. Bringing the secret and private site out of the woods and into public view. I plan on trying to bring some these structures to some of the Western Pennsylvania Comic-Cons.”

Below is a video shot by Mike at the site. This is what passion and horror fandom is about. So yeah, fuck it; the guy’s a hero.