A trailer has landed for rape revenge flick Even Lambs Have Teeth, which hits UK DVD on June 13th through Matchbox Films. 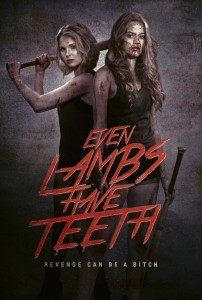 Even Lambs Have Teeth also stars Michael Karl Richards, Craig March, Garrett Black and Christian Sloan. Check out the short, sharp trailer below. It hints at a whole lot of nastiness.