“Even Gorier” Ichi The Killer Restoration Headed to Cannes 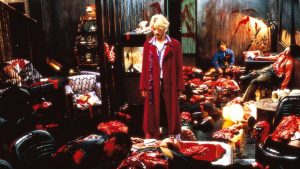 Takashi Miike’s Ichi the Killer caused quite a stir upon its 2001 release, its graphic scenes of violence and sadism leading to cuts and outright bans in many countries. Coming two years after the masterful Audition, it also helped to bring the celebrated director firmly to the attention of Western audiences partial to cinema’s more extreme side. As revealed this week in Variety, the blood-drenched opus has now undergone a brand new restoration which is to be screened at this year’s Cannes Film Festival.

The restoration was handled by Hong Kong-based L’Immagine Rittrovata Asia for Emperor Motion Picture, who originally co-produced the film. Talking to Variety, Emperor’s head of international sales May Yip said: “Miike is prolific, but ‘Ichi the Killer’ stands out as something special. Unfortunately, the materials were in very poor condition as it was shot in Beta and only later converted to 35mm. So, given that there was enduring interest and licenses expiring, we took the decision to restore it. The result will be better, even gorier.”

Miike will be on the Croisette at Cannes this year for the fifth time, with his Samurai drama Blade of the Immortal.