Although an incredibly versatile director with a long and distinguished career behind him, Pupi Avati remains best known outside of Italy for two crucial contributions to the Eurohorror canon; namely The House with Laughing Windows (1976) and this chilling slow-burn masterpiece. By the same token, Zeder’s star Gabriele Lavia might be best known to us for getting a breadknife in the neck in Inferno (1980) and pulled along by a truck in Deep Red (1975) but he is in fact a highly regarded actor and an important figure on his home country’s theatre scene. 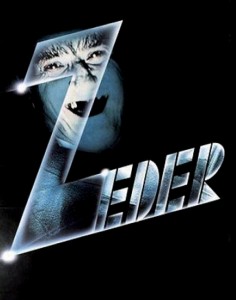 Alessandra (Anne Canovas) surprises her husband Stefano (Lavia) on his birthday with the present of a second hand typewriter. The struggling writer gleefully sets about starting his latest novel on it, but soon becomes distracted when he starts to piece together the imprints of words left on the typewriter’s ribbon. This spirals into obsession when he finds that these writings from a certain Paolo Zeder argue the existence of ‘K-zones’ – areas where normal rules of space and time do not apply and the dead can be brought back to life.

Stefano soon finds that the typewriter belonged to the late Don Luigi Costa (Aldo Sassi) and despite being met with a conspiracy of silence manages to build up a picture of the late priest as not being quite as dead as he’s cracked up to be. The trail ultimately leads him to a half-built hotel in the middle of nowhere, where he finds the answers he is looking for and is forced to make a tragic and terrible decision.

Zeder may be light on the gore and lacking in on-screen murders, but it’s beautifully shot, well acted, and absolutely steeped in an atmosphere of gradually mounting dread that turns to terror in the film’s last half hour. Avati had already proved himself a master of unease with his ’76 giallo offering and here is further evidence. The crumbling locations in Bologna and elsewhere, the people’s faces, the strange quality of the light. The modernistic lines of the half-built hotel in the twilight making the unwelcoming edifice almost a character in itself. Riz Ortolani’s terrifying-yet-still-slightly-funky (this is Eurohorror, man) main theme is sparse and angular, just like the film. Lavia is perfect as Stefano, at times more than a little creepy himself in his earnest single-mindedness.

All of which could easily be said to gloss over the fact that Not a Great Deal Actually Happens in Zeder. Guilty as charged, perhaps, but the oh-so-gradual build-up does result in an incredibly spooky final reel. It increases the impact of haunting moments that could have been buried otherwise, such as that where Stefano spies on the building from the vantage point of a motel room only to have the face of the undead Costa leer right back at him, or where a mutilated corpse and a severed head are his and our only clues to the aftermath of Costa’s recent reawakening.

Among the most memorable is that where Stefano stumbles upon an abandoned room full of surveillance equipment, with a bank of TV monitors all trained on the the grainy image of what can only be Costa in his tomb. When we later see the same screens, the toothless face of the resurrected priest comes to life, cackling, crone-like at Stefano and the viewer, too, sending a shiver down the old spine even if he does look a little like Grandpa Munster. 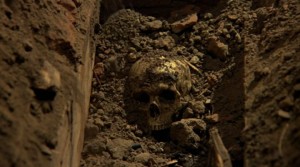 Although not a ‘zombie’ film in any traditional sense, a trimmed version of Zeder was cranked out on US VHS by Lightning Video, under the title of ‘Revenge of the Dead’ and with box art designed to fool one in to expecting a Romero-style living dead outbreak intestine-muncher. One can only imagine the viewers’ mounting outrage and disappointment after having the film sold to them in such a way. Naughty Lightning Video.

However, there’s certainly no shortage of those movies, especially not these days. What we have instead with Zeder is a unique and interesting piece that lives on in a K-zone of its own – and our waking hours are forever haunted by Ortolani’s score and Lavia’s final blood-curdling scream.