Eurohorror of the Week: The Washing Machine (1993) 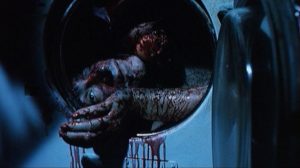 When a film begins with a be-wigged sex worker arguing with her pony-tailed, Armani-suit-clad eurotrash manfriend, only for the pair to break off and start shagging against an open fridge while her sister watches unseen from the staircase, playing with herself, it’s safe to say that you’re in for some seriously sleazy business. And such is indeed the case when it comes to this entertaining latter-day giallo from infamous CANNIBAL HOLOCAUST director Ruggero Deodato. 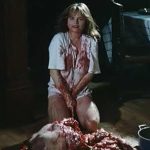 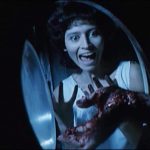 A quick phone call to the cops summons the ‘hero’ of the piece, Inspector Stacev (Philippe Cairot), but by the time he’s on the scene no sign that a body was even there can be found. Stacev assumes it was all in Ludmilla’s mind, and one does have to concede that all three sisters do seem a few garments short of a load. However, post-visit he can’t seem to help bumping into at least one of them everywhere he goes, with each of them incredibly keen to not only make sure he gets her side of the story, but also roger him senseless in one outrageous scene after another. Quickly becoming obsessed with the ‘case’, Stacev finds himself repeatedly drawn back for more, much to the understandable vexation of his live-in lover, Irina (Claudia Pozzi). But what the hell kind of a sordid business is he getting drawn into here? What are those kooky sisters really after? And, most of all, who will ultimately wind up on the spin setting? 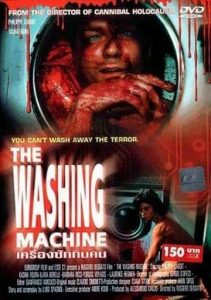 This utterly absurd but oddly compelling Italian / French / Hungarian co-production was Deodato’s last movie to date to gain any sort of theatrical release, and the further decline of his home country’s film industry since his heyday can clearly be seen in the lower production values and over-reliance on smut. However, this doesn’t mean there’s no artistry on display. He keeps things clipping along at a tight pace and veteran cinematographer and frequent Deodato collab Sergio D’Offizi (who also worked with Fulci on DON’T TORTURE A DUCKLING) washes the Budapest locations in cool and clinical hues. It’s about as stylish as a low budget contemporary thriller made in 1993 can be expected to be, unlike its 60s/early 70s equivalents that often come across as such by default. A sinister synth score from Claudio Simonetti certainly doesn’t hurt either in this respect.

The sex is strictly of the softcore variety, you’ll either be pleased or disappointed to learn, and Deodato always stops short of letting things go TOO far – which may come as a surprise if you’re only familiar with CANNIBAL HOLOCAUST and HOUSE AT THE EDGE OF THE PARK. It’s on the whole too light hearted to reach those heights/depths of cruel, unrelenting grimness. It’s also relatively sparing on the old gore, with just one scene in particular that might make the queasy among us reach for the barf bag. 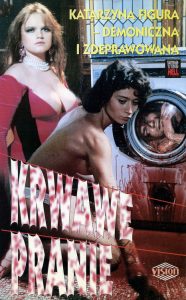 Much of the entertainment value comes from seeing Stacev become increasingly knackered from his vigorous encounters with the three sisters as the narrative wears on. What’s more, it’s a refreshing change to see a giallo largely lacking in violence towards women, although it must be said that the eventual suicide of Irina is rather callously glossed over.

This bizarre, sleazoid opus certainly isn’t going to win the giallo genre any new fans, but those already versed in the ways will see the fun in it, even if it is for one viewing only. And the English language title may be mildly amusing, but I can’t help but prefer the original: VORTICE MORTALE – ‘Deadly Vortex’!