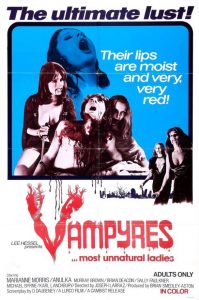 Initial inspection may lead you to question whether the erotic classic Vampyres is a ‘Eurohorror’ at all, as most films within this bracket hail from mainland Europe, and often more specifically from France and Italy. Vampyres on the other hand feels thoroughly British. Despite being co-written and directed by Spanish filmmaker José Ramón Larraz, and starring in a lead role the continental sounding actress Anulka Dziubinska – who, though of Polish descent, was actually born in Lancashire – this wonderfully creepy film was actually a joint British / Spanish production.  It deserves its place within the upper echelons of the Eurohorror pantheon however, as it contains all the elements which characterise the sub-genre, and then some: naked girls galore, extremely violent, sudden deaths, a mysterious house where odd things happen and everything taking place during what seems like a perpetual thunder storm.

Two beautiful and debauched vampire lovers – Miriam (Marianne Morris) and Fran (Dziubinska) live alone in an isolated house deep in the English countryside. Though happy with their own company, they will occasionally pick men up on the lonely roads surrounding the house, bringing them home to satisfy their depraved lust for sex and blood. Only when they pick up the broody Ted (Murray Brown) one day, do they meet a man who proves more than a match for their evil ways, and the scene is set for a showdown on a truly horrific scale. 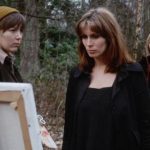 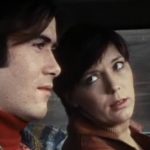 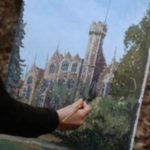 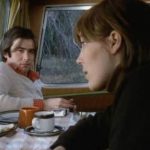 Vampyres’ storyline – what there is of it – is threadbare at best. In a brilliant interview with Morris and Dziubinska, which accompanies the film in its 2010 Blu-ray release by Blue Underground Films, Morris explains how Larraz would frequently disregard the written script and encourage the cast to improvise. This offline approach shows in the finished film, with some of its most effective sequences requiring very little dialogue at all.  Instead the film’s stars are allowed to revel in their sensuality in the frequent no-holds-barred sex scenes, which are usually the prelude to some amazingly bloody and brutal murders: you don’t want to be at the receiving end when these deadly nymphettes get into their stride. 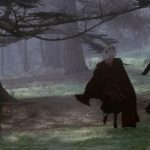 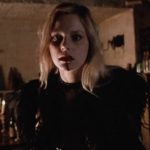 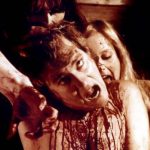 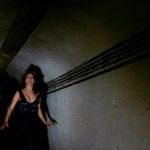 One of the film’s most intriguing aspects is how little if any background is revealed about the various characters.  Whether it be Miriam and Fran, their main male victim Ted, or a couple John (Brian Deacon) and Harriet (Sally Faulkner) who unfortunately decide to pitch their caravan for the weekend in the grounds of Miriam and Fran’s country house, the viewer is none the wiser by the end of the film as to who any of these disparate characters really are or how they came to be there in the first place. That the end for those fortunate enough to survive the freakish events is equally mysterious, simply adds to the film’s sense of disquiet. Where this lack of depth might irritate when watching most films, here it simply adds to the gloom, melancholy and unease which permeates every aspect of the proceedings. 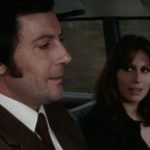 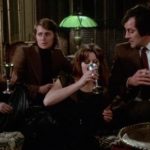 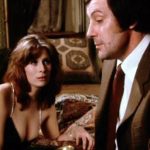 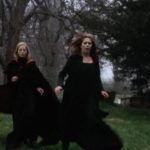 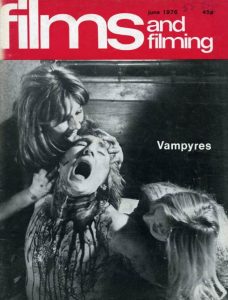 All this aside though, it is the setting where the action plays out which leaves the most lasting impression on the viewer.  Shot in and around Oakley Court in Berkshire – where would British horror films have been in the 1960s and 70s without this famous mock gothic pile? – the castellated mansion, and its surrounding area, are the real stars of the show. Whether its along the lonely country roads near the house, where the two lovers waylay potential new victims as they pretend to hitch a lift home, the deserted churchyard next door through which the girls flit at dawn to escape the encroaching daylight, or the house itself with endless panelled rooms or the warren of wine cellars beneath, everything about Miriam and Fran’s monstrous mansion screams of decadence and death.