Eurohorror of the Week: Tombs of the Blind Dead (1972)

Few films in the wildly variable annals of Eurohorror enjoy a cult following quite like Amando de Ossorio’s inaugural BLIND DEAD offering. Aside from getting three sequels of their own, the sinister, visually-impaired Knights Templar have been the subject of a number of unofficial low-budget sequels, homages, and comic books, and live on as the malefic mascots of doom metal bands the world over. But does the film itself warrant this? Indeed it does. 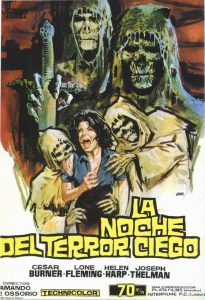 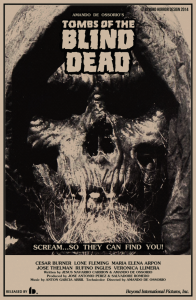 LA NOCHE DEL TERROR CIEGO (‘The Night of Blind Terror’) is a Spanish/Portuguese co-production, and a vast improvement in every way imaginable over Ossorio’s first horror opus, the mildly enjoyable but threadbare Anita Ekberg-starrer MALENKA (AKA FANGS OF THE LIVING DEAD, 1969). In fact, just to mention the director’s name is to immediately conjure up images of these, his greatest creations.

Holidaying platonic pals Virginia (María Elena Arpón) and Roger (César Burner) run into Virginia’s old school chum, Bet (Lone Fleming). Immediately liking the cut of Bet’s jib, Roger suggests that she come along with them on their planned trip into the countryside. What he doesn’t know is that there’s no small amount of unresolved sapphic tension between the two women, dating back from their boarding school days, and this results in Virginia jumping from the train in the middle of nowhere. Finding the abandoned medieval abbey-village of Berzano, she gets out her sleeping bag to spend the night there. But as the witching hour arrives, the withered, skeletal Knights are rising from their graves to claim the film’s first victim…

There’s nothing else in the history of cinema quite like the scenes where these undead knights, caked in the dust of centuries, rise from their graves and relentlessly shamble after their victims. These and the shots of them riding their ghostly steeds across the plane in slow motion are among the most iconic in all of European horror cinema, second only perhaps to Barbara Steele having the ‘Mask of Satan’ hammered onto her face in Mario Bava’s BLACK SUNDAY (1960). But one also mustn’t discount the power that Anton Garcia Abril’s influential score brings to these, steeping the viewer in a bleak netherworld of gothic terror. 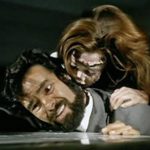 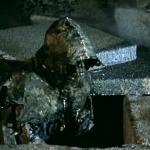 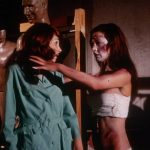 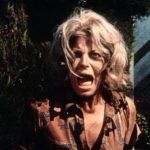 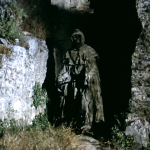 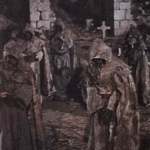 These Blind Deadites are often lumped in with your garden-variety zombies, but they’re far from this, as Ossorio himself was keen to point out, He called them “mummies on horseback”, a far more accurate description for these devious and sadistic students of the occult who have brought about their own crusty immortality with a bargain with Satan.

We even forgive some the blindingly (!) obvious day-for-night shooting when the effect is this sublime. But there are other faults that are less easy to overlook. A completely unnecessary rape scene, carrying the reprehensible suggestion that Bet is being ‘cured’ of her lesbianism, for one thing. Ouch. A scene where Virginia rises from her morgue slab is effective, but the sub-plot around the Knights passing on some kind of zombie-esque contagion isn’t returned to and has no bearing whatsoever on the rest of the action. It also must be said that our hero, Roger, comes across as pretty vacuous. However, considered as a whole, the film has an undeniably haunting power, and the climactic massacre, wherein a train-load of passengers come face to face with the lethal undead Knights, is nothing short of magnificent.

Some have suggested that the Knights represent ‘Old’ Spain, the then-still-in-power Franco regime rising up to consume the more open-minded young with their fascistic mores. It’s a convincing argument, not without some force, but we don’t know for certain that this was an intended subtext, and it must be said that the film generally comes across as ‘small c’ conservative in outlook, despite gleefully exploiting the lesbian factor. But this doesn’t affect enjoyment of the film one jot. 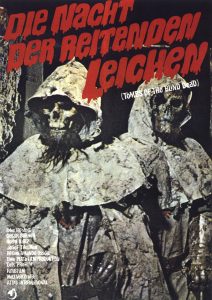 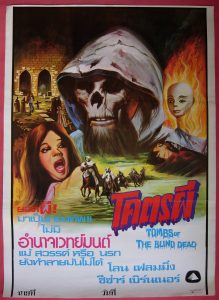 What we do know for certain is that TOMBS OF THE BLIND DEAD a Damn Fine Horror Film that should be tracked down by any fan of the genre, whether a devotee of ‘Eurohorror’ or not.