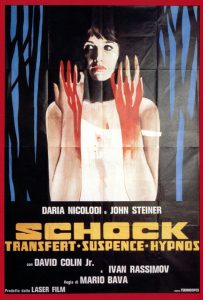 Lamberto Bava had to lure his father – the great Mario Bava – out of retirement to work alongside him on what would turn out to be the old Maestro’s final film.

Bava Snr. had been struggling with depression after the perceived failures of Lisa and the Devil (1973; flopped, recut and re-released in ’75 as Exorcist rip-off ‘House of Exorcism’, flopped again) and Rabid Dogs (1974; main investor killed in not entirely unsuspicious car accident, footage impounded by estate). Forty years later, both are considered by those in the know to be sublime pieces of cinema – it’s just a shame that Bava couldn’t have known this at the time.

Star Daria Nicolodi was in a similarly dark place at that time after losing out on the main role in Suspiria (also ’77), a project she herself had devised with then-partner Dario Argento, based on stories told to her by her grandmother. A spiral into depression and a bout of anorexia finds her almost painfully thin in Shock. However, together with Bava Snr., here she found redemption. 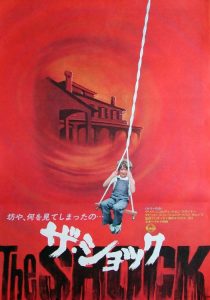 Daria plays the similarly-named Dora, who moves back into her home of several years ago with second husband Bruno (the dependable John Steiner) and her small boy, Marco (David Colin Jnr.). But this is a house of painful memories; Dora left the joint in the first place because her first husband and Marco’s father – a deranged heroin addict – had supposedly committed suicide here. Yes, I said ‘supposedly’.

Soon household objects are moving around and little Marco is starting to act up. Entering Shock into the child possession sub-genre that was still riding high in the wake of The Exorcist (’73) and The Omen (’76), we see him getting up to such unsavoury behaviours as stealing a pair of his mother’s knickers and cutting them up, doing weird things with dolls, caressing her face in her sleep and at one point even trying to dry-hump her. Feeling slightly queasy now? Yeah, it’ll do that. However, for the most part the movie belongs more in Repulsion (1965) territory, charting the stages of Dora’s inevitable breakdown, her visions and nightmares, as her dead husband increasingly makes his malevolent presence felt.

Shock tends to be thought of as ‘lesser Bava’ by many, and admittedly we do find him in somewhat reduced circumstances; circumstances that can be seen to be indexical of the drop in fortunes of the Italian film industry itself. We see little of the kind of jaw-dropping production design and crisp colours that we did in, say,  Black Sabbath (1963) or Blood and Black Lace (1965), because Bava doesn’t have a Titanus or Cinecitta soundstage at his disposal. But he still makes it look good.

Aside from a handful of short scenes, the bulk of the film is shot in and around a mod villa in Rome belonging to Enrico Maria Salerno, the veteran actor and director whose many roles included investigating Inspector Morosini in Argento’s The Bird with the Crystal Plumage (1970). And Bava gets good use out of it, his camera charting almost every inch, making it a character in itself. 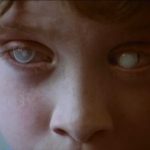 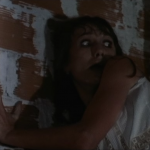 Nicolodi IS Dora, clearly channelling all her rage, fear and frustration into the role for us all to see on screen. It’s an excellent performance and in terms of screen time and character investment it stands as her meatiest outside of the theatre. Her film roles grew increasingly less enviable as her relationship with Argento continued to sour, but work is work, I guess. Tenebrae’s John Steiner is an inspired choice to play her understanding-but-often-absent pilot husband and it’s always nice to see Eaten Alive (1980) star Ivan Rassimov essaying the role of a half-decent human being, even if he doesn’t really get to do much here. 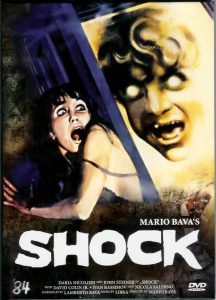 One thing that Bava can always be counted on for is interesting imagery, and this is no exception. When Dora and Bruno make love we see them through a glass shelf on which lies a large porcelain sculpture of a hand. Filmed from above, the hand moves, seeming to encircle the lovers and seal their fate. A scene where a slinky spring ominously comes down the stairs recalls the bouncing ball that announced the attacks of the killer child in Bava’s earlier Kill, Baby, Kill! (1966). Also unforgettable is a moment towards the film’s end, but seeing as this forms the film’s biggest jump scare I won’t spoil it by describing it here. You’ll know it when you see it!

The film is also strengthened by a fine score from Italo-prog band Libra that one would be forgiven for mistaking for the work of Goblin – and indeed we find that band’s drummer on Deep Red (1975), Walter Martino, in their line-up. 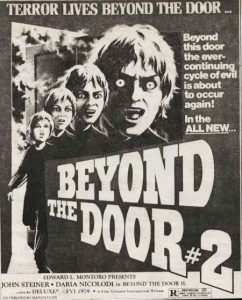 Shock was released in US as Beyond the Door II, selling it as an ersatz sequel to the 1974 Exorcist rip from Ovidio G. Assonitis – although there is a coincidental connection in that Assonitis’ film marked the only other screen role for child actor David Colin. Weirdly, although the earlier film was released in the UK as The Devil Within Her, Shock became Beyond the Door II here also. (Just to add to any confusion, Peter Sasdy’s I Don’t Want to be Born (1975) was released Stateside as The Devil Within Her). In addition, this wasn’t until 1980, where, post Halloween (’78), Dawn of the Dead (’78) and Alien (’79), most cinemagoers had had their fill of possessed nipper shenanigans, thank you very much.

From here Lamberto would go on to his credited full directorial debut, the not-too-dissimilar female descent into madness that is Macabre (1980), and this with the presence of Nicolodi makes Shock an important link in the chain from one generation of Italian horror filmmakers to another. It could be said that the Maestro deserved a far more lavish project as his swan song, but Shock is the one we have and we should treasure it.