Eurohorror of the Week: The Sadistic Baron Von Klaus (1962) 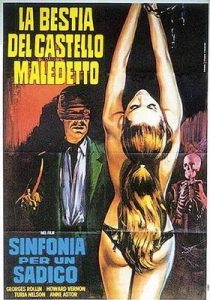 In a classic article for the inaugural issue of Video Watchdog magazine, respected cult cinema and Jess Franco expert Tim Lucas stated that you have to see all of the late director’s films to truly understand any one of them. I can’t really testify to the veracity of this as there’s still a truckload of them I’ve yet to catch (worry not, I’m working on it), but a viewing of this early work may well change the way you think about this unique purveyor of perverse delights.

Following up on Franco’s genre debut THE AWFUL DR ORLOF, a huge success earlier that same year, LA MANO DE UN HOMBRE MUERTO (‘The Hand of a Dead Man’) brings back that film’s star Howard Vernon, the Swiss actor who’d previously had supporting roles in films by French cinema giants Jean-Pierre Melville and Sacha Guitry before seemingly throwing in his lot with the eccentric maverick.

A legend persists in the small German village of Holfen that, back in the 17th century, a Sadistic Baron Von Klaus lured local girls to his castle, there to do terrible things to them before dumping their bodies in the local swamp. When corpses start showing up once again, the yokels are convinced that the old Baron has returned from the grave and big city reporter Karl Steiner (an uncredited Fernando Delgado) is despatched to Holfen to get the scoop.

Naturally, suspicion falls almost immediately on twitchy current Baron Max Von Klaus (Vernon). Max’s young leather-clad nephew Ludwig (Hugo Blanco) has also recently arrived, with fiancée Karine (Paula Martel) in tow, to say his goodbyes to his dying mother (María Francés), whose last words are a dire warning about the evils of the castle’s cellar, that has remained locked for all these years. As Steiner joins forces with local police inspector Borowski (Georges Rollin) the net closes in on the killer, but will their combined efforts be enough to save Karine from the clutches of the evil Baron’s imitator, whomever this may be? 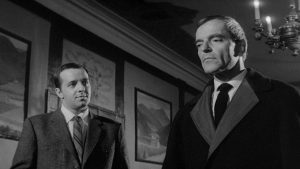 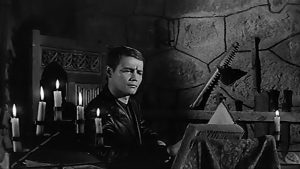 Those only familiar with Franco’s more slapdash ‘guerilla filmmaking’ efforts of the seventies and eighties are in for something of a revelation with this monochrome work. With a plot that more or less holds together and animated, focussed actors holding reasonably intelligent conversations that for the most part make sense, this is a far cry from the likes of DRACULA, PRISONER OF FRANKENSTEIN or DEMONIAC, that’s for sure. There’s an enjoyable wry humour in the interplay between Steiner and the world-weary Inspector Borowski, and we really get a feel for life in the village and the impact of the murders on its community.
Franco wrings every penny’s worth of production value from the attractive locations, and the cinematography by Godofredo Pacheco (returning from DR ORLOF) is often beautiful. A backlit shot of the cemetery containing the Von Klaus family crypt immediately brings Mario Bava’s work firmly to mind, and the look of the film in general is easily the equal of many a more celebrated Italian Gothic of the period. 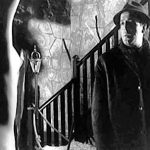 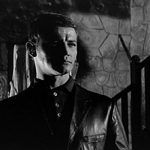 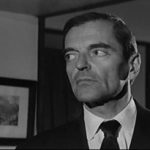 Despite a gratuitous-but-relatively-coy disrobing scene, for its first seventy-five minutes BARON VON KLAUS is a fairly light and ‘civilised’ affair as far as proto-giallo murder mysteries go, especially ones that bear the name of the infamous Franco. But before you think of slipping the film on for your grandma’s next visit, consider that, almost without warning, things suddenly take a turn for the harrowing and sexually deviant in the infamous ‘dungeon scene’, where our now revealed killer strips hapless barmaid Margaret (Gogó Rojo, here ‘Robins’) down to her stockings, whips her repeatedly with a chain, hangs her up like so much halal beef, and guts her with his ‘blade of Damascus steel’. That last act may be offscreen, but the cumulative effect of the scene is so totally out of the blue, and so unlike anything in any other horror melodrama of the period, that it almost seems like it’s strayed in from another, later film – it’s almost as shocking today as it must have been 55 years ago. There’s no clearer pointer to the perversely erotic beats that would define Franco’s work for the rest of his career, and it’s hard not to see the scene as a pivotal moment in the evolution of Eurohorror as a whole. 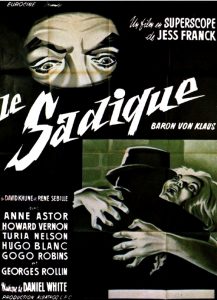 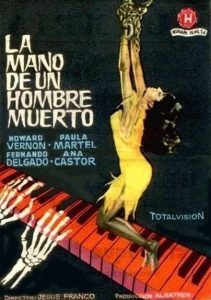 Something of an eye-opener, then, to say the very least. While no-one could seriously claim BARON VON KLAUS to be a great masterpiece, it certainly has its place in cinema history, and even if you despise the controversial director’s later efforts I’d certainly recommend giving this early work a try.