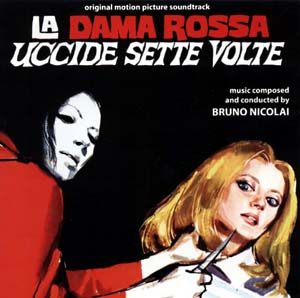 LA DAMA ROSSA UCCIDE SETTE VOLTE was director Emilio Miraglia’s follow up to his ’71 horror-giallo THE NIGHT EVELYN CAME OUT OF THE GRAVE, and although he worked in other genres, these two firm fan favourites have ensured that his reputation has rested on them alone. Like EVELYN, THE RED QUEEN (also known as THE LADY IN RED KILLS SEVEN TIMES) has more the feeling of a ‘programme filler’ – let’s face it, that’s what it was back then – than comparable contemporary works by Argento, Fulci, or Martino, but it’s clear why this enjoyable stew remains popular. It was a co-production between Italy, West Germany (where the film was lensed and is set) and Monaco, a country that doesn’t come up very often in discussions of film.

An old family legend of the aristocratic Wildenbrück family dictates that every hundred years their ancestor ‘The Red Queen’ returns to slay seven people, the final of which invariably being a family member that represents ‘The Black Queen’, who way back when started it all by murdering her ‘Red’ sister in a fit of rage. Cut to ’72, and it seems that history is repeating itself when a red caped, black haired woman starts to murder those in the orbit of young Kitty Wildenbrück (Barbara Bouchet), mainly those working at the fashion house, ‘Springe’, where she plies her trade. 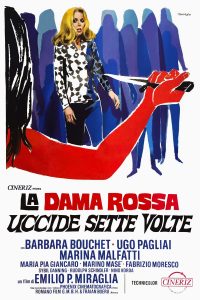 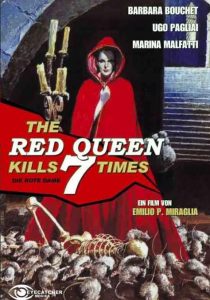 Screw the old legend, though, Kitty is more worried that the killer may her own sister Evelyn, back from the dead and out for revenge after being accidentally killed by Kitty in a particularly vicious cat-fight. Although not in the least bit ladylike, Kitty’s lover Martin (Ugo Pagliai) becomes prime suspect, seeming to have the most to gain after Springe head honcho Hans (Bruno Bertocci) buys the farm; the police’s time would be better spent looking closer to home at Wildenbrück castle, where the reading of the old family patriarch’s will is the cause of much excitement for Kitty’s cousin Franziska (Marina Malfatti, returning from EVELYN) and her indolent, money-grabbin’, good-for-nothing partner, Herbert (Nino Corder). Is this the Red Queen of the time-honoured curse, or has Evelyn Come Out of the Grave once more? Nah, more likely that someone’s after all that loot for themselves – this is a giallo, after all. But can Kitty and Martin flush out the killer before being either jailed or butchered themselves? 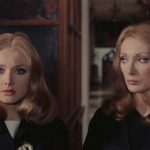 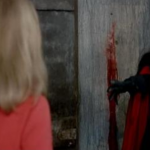 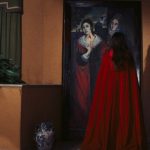 Miraglia’s film seems to possess a split personality itself, dividing up the action between the Wildenbrücks’ sprawling gothic castle, the cheesy Springe fashion house, and Kitty and Martin’s eye-wateringly garish mod apartments. The use of the castle lends the film deceptively high production values, with all the scenes taking place there, particularly those in its underground passages, looking amazing. Kitty and Franziska are clearly so used to seeing bats fly around down there that they don’t even flinch, but the odd rat popping out still ushers forth a scream or two.

Despite the wonderful gothic ambience of these scenes, the film is most memorably of the super-seventies variety, showcasing the mod fashions and décor of the period. You’ll either be in heaven or feel slightly queasy, depending on your taste for such things. Where the castle gives the illusion of opulence and expense, we also find scenes at the ‘police station’ to be obviously filmed in same building as Springe’s offices. Acting-wise, most of the performances are functional at best, but Malfatti is wonderfully shifty and horror/sci-fi legend Sybil Danning stands out (in more ways than one) in a relatively early film appearance as the screw-her-way-to-the-top Lulu.

Things are kept moving at enough of a clip to ensure that we’re never bored, with some gratuitous female nudity or a Red Queen murder never being far away. While multiple stabbings with an old Wildenbrück family heirloom ceremonial dagger are her default method, we also see her play a rather nasty trick wherein Martin’s insane wife Elizabeth (Carla Mancini) ends up impaled by the chin on a spike on the sanatorium’s outer fence railing, and trapping smackhead-blackmailer Peter’s (Fabrizio Moresco) coat in the door of her VW Beetle to then drag him along the road.

A wonderful score from Morricone-affiliate and genre vet Bruno Nicolai (also returning from EVELYN) adds further quality to the proceedings, albeit including at least one recycled cue that Jess Franco fans will recognise from the opening of A VIRGIN AMONG THE LIVING DEAD. Some may think that the main theme is overused. I don’t.

The figure of the Red Queen herself makes for an unforgettable villain, and a refreshing change from the usual black-leather-gloved and stocking-mask-wearing killers that dominate the genre. That the killer is a woman tends to be treated as a shocking reveal in many of these, but RED QUEEN is given a slightly different vibe by the killer being from the outset clearly a woman, her gleeful witch-like cackling receding into the distance after every murder. However, her defining, iconic moment comes in a dream sequence, where a long tracking shot sees her run towards the viewer, dagger raised, the camera retreating from her deadly advance down a spacious corridor of the Springe offices.

On the downside, a rape scene involving Kitty may be almost completely off-screen, but it’s also so casually dismissed as to be an afterthought, and a queasily offensive one at that. It serves only to add a further superfluous pinch of sleaze to what is already a fairly potent gumbo. It can also be said that the plot (both the film’s and the murderer’s) is ridiculously complicated, but giallo fanatics are used to this by now. These things aside, while purely generic in many ways, THE RED QUEEN is still a solid and highly watchable entry.

B-movie gold, then? No, my friends, this is B-movie platinum. A real seventies shag-pile treat. 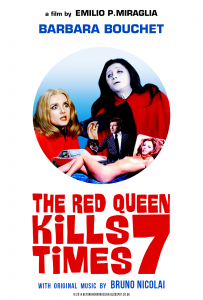 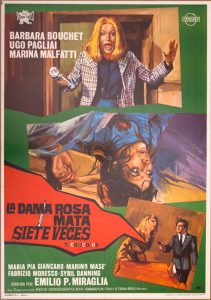