Eurohorror of the Week: The Playgirls and the Vampire (1960) 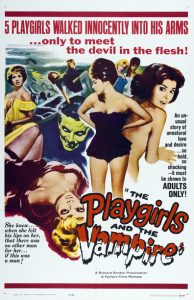 L’ULTIMA PREDO DEL VAMPIRO (‘Prey of the Last Vampire’) was one of an early spate of movies made in Italy in response to the huge success of Hammer’s early horrors in the peninsula – which in turn led to other countries getting in on the act and ushering in that vast and varied pantheon that we now refer to as ‘Eurohorror’.

Director Piero Regnoli is better known for his über-prolific string of writing credits, including I VAMPIRI (1957), the first Italian horror picture of the sound era, and more infamous ‘so-bad-it’s-good’ fare as NIGHTMARE CITY (1980) and BURIAL GROUND (1981). This would represent his sole directorial credit within our beloved genre.

Coming hot on the heels of Renato Polselli’s THE VAMPIRE AND THE BALLERINA, released just a few months earlier, it carries over one of that film’s stars, Walter Brandi, composer Aldo Piga, and the same concept of taking a troupe of slinky dancing girls and putting them in a gothic castle, there to saunter around in their negligées before being bothered by a pesky bloodsucker.

A bus carrying impoverished impresario Lucas (Alfredo Rizzo) and his troupe of glamour gals gets caught in a storm, giving its passengers no choice but to hole up in nearby Castle Karnassi, inhabited only, it seems, by Count Gabor Kernassi (Brandi), his uptight head servant, and equally unwelcoming grounds-keeper. Stop me if you’ve heard this one before, but our Count immediately singles out Vera (Lyla Rocca), owing to her resemblance to an ancestor in an old family portrait, and she, of course, turns out to be marginally less bubble-headed than the rest of them.

Soon, however, another of the ‘Playgirls’, Katia (Maria Giovannini), comes a cropper at the hands of the unseen vampire. Lucas’s devastated, compassionate response on finding her body outside is “That’s all we need!” When a rising river and broken bridge dictate that they can’t leave the castle, their answer is simply to bury the poor girl, and they’re soon back to rehearsing their latest routine –  albeit all appearing to do their own separate dances. Soon Katia rises as one of the bloodthirsty undead, and Kernassi himself also appears to be stalking the grounds baring a fine pair of fangs of his own. But all is not quite how it at first seems… 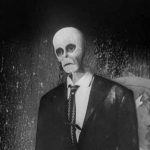 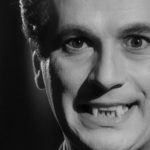 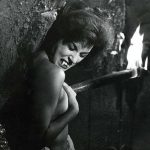 This early, clumsy attempt at an erotic horror can’t help but appear rather quaint in this day and age, but it’s still slightly better than one might expect. The girls themselves look as though they’re struggling to take the whole thing seriously, and Regnoli’s camera frequently lingers on their uniformly long legs. There’s a surprisingly bloody staking, if softened by the black and white photography, but also one of the most laughable vampire disintegration scenes that you’re ever likely to witness. An occasional sense of eeriness is evoked simply by virtue of the film’s age and use of a real castle, but many indoor scenes are over-lit. 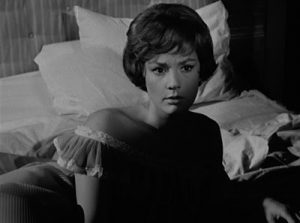 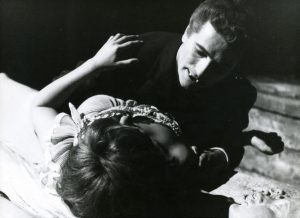 Rizzo’s unfunny mugging and grimacing when con fronted with a naked, undead Katia has to be seen to be believed, almost distracting us from the fact that she enjoys the distinction of being the cinema’s first ‘naked vampire’. Coming before either Jean Rollin or Jess Franco had even made their first genre films, PLAYGIRLS can at least also lay claim to doing SOMETHING before Hammer did. Walter Brandi (often Anglicised to ‘Brandt’) can also be said to be one of Italy’s first homegrown ‘horror stars’, and went on to appear in a number of others, often with Rizzo in tow, including SLAUGHTER OF THE VAMPIRES (1962), TERROR-CREATURES FROM THE GRAVE (1965) and the immortal trash classic BLOODY PIT OF HORROR (also ’65). The not-dissimilar scenario makes PLAYGIRLS seem almost like a dry run for the latter. He comes across as woefully wooden for most of his screen time, but is clearly having much more fun when he gets to ‘vamp out’. No Chris Lee is he, that’s for sure.

The film was a big hit on its home turf, if not quite as much as BALLERINA, and did good business on the drive-in and grindhouse circuits when released in the States three years later under its new ‘PLAYGIRLS’ title, despite the fact it was already looking slightly ‘long in the tooth’ by then. I’m guessing that the ‘Playgirls’ were more directly instrumental in this success than the ‘Vampire’. It wouldn’t find its way to the UK until ’65, where it was cut down to 66 minutes to be plonked at the bottom of double-bills. 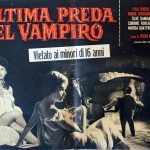 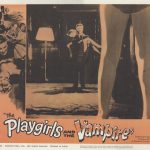 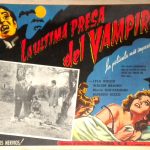 Decidedly weak in comparison to the earlier I VAMPIRI, and certainly to the same year’s electrifying BLACK SUNDAY, PLAYGIRLS still manages to entertain for its brief running time. Again, today it’s more cute and kitschy than it is anything else, and as such you’d have to be REALLY into this stuff already to want to add it to your watch-pile in the first place. For the rabid Eurohorror devotee, however, it definitely has its place in history, and as such should constitute required viewing.