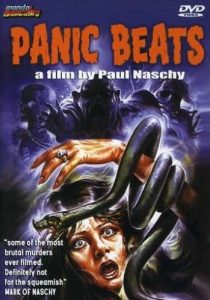 The ‘Golden Age’ of Spanish horror may well have been severely on the wane by the time LATIDOS DE PÀNICO (US: PANIC BEATS) came around, but homegrown genre legend Paul Naschy certainly wasn’t, as this wonderfully sleazy gem ably illustrates.

Written and directed under his real name of Jacinto Molina, it forms a sort-of-sequel to the earlier HORROR RISES FROM THE TOMB (1973, directed by Carlos Aured), bringing back as it does the depraved medieval warlock Alaric de Marnac, played so memorably by Naschy in that film.

‘Knights in shining armour’ are supposed to be a good thing, right? Not so here – we open with one on horseback chasing down a naked woman through some misty woods, pulling up his visor to reveal de Marnac, who promptly caves her head in with his double-headed mace. Cue title sequence and cut to the present day, where we find the evil one’s descendant Paul Marnac (Naschy again, of course) taking his terminally ill wife Geneviève (Naschy veteran Julia Saly) back to his family villa, built on the site of Alaric’s Castle of Terror.

Local legend has it that de Marnac emerges from his grave every hundred years for another reign of terror, and Geneviève soon has good reason to believe this, albeit not for long, when she’s literally scared to death by a series of malefic manifestations culminating in the appearance of the armour-clad old warlock himself. 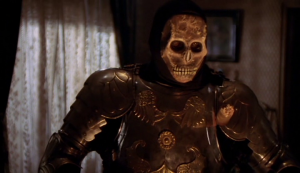 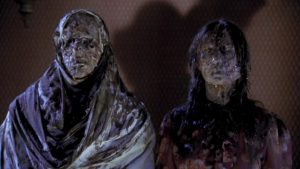 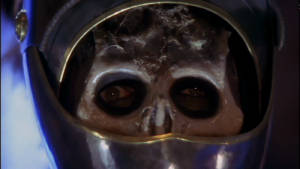 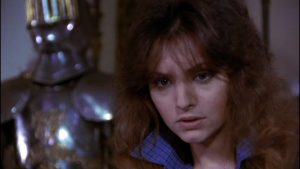 However, the reasons for this turn out to be a hell of a lot less supernatural than they appear – it’s all a scheme cooked up by no-good Paul and reform school girl Mireille (Silvia Miró), who’s been working as maid at the villa, to get their grubby hands on the poor woman’s fortune without any bothersome waiting around. Bad news comes for Paul when it further transpires that Mireille has plans for him too, and it’s not long before the REAL Alaric comes a’ callin’…
While Naschy’s Italian counterparts were making their films appear ever more ‘American’ for the export market – a process that would eventually make them more or less homogeneous, not to mention boring, by the end of the decade – PANIC BEATS screams ‘Spanish’ from every nook and cranny. From the villa to the actors to de Marnac’s armour, the film has its cultural identity firmly stamped upon it. 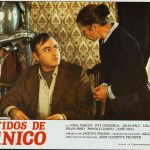 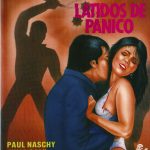 It’s a potboiler, naturally, but rarely are such time-wasters this much ungodly fun. Responding to the splatter/gore boom of the time, Naschy ups the ante in terms of graphic violence and brutality in a way we’ve never seen before, with heads brutally bludgeoned to a pulp and stomachs evacuated of their contents. Okay, the make-up effects aren’t exactly great, but they’re certainly icky enough to be fit for purpose.

The major fault, if there is one, is that we’re hip to the fact that our Paul is a roving-eyed, fortune-hunting roister-doisterer from the word go, making the plan obvious, so any LES DIABOLIQUES-esque suspense is out of the window; making the scenes where Geneviève is terrorised by eldritch apparitions fall a bit flat. And why is Mirielle’s real lover, a drug addicted bell-end called Maurice, kept hidden in the shadows as a mystery man with no twist or revelation to justify this? The words ‘abandoned plot strand’ probably hold the answer. 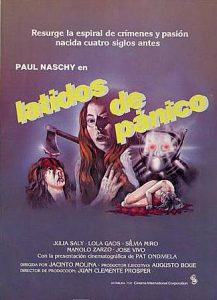 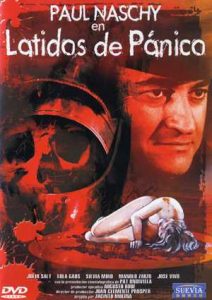 Nitpicks, say I, when one is having so much low-rent horror fun. While far lesser known than Naschy’s Wolfman sequence – hardly household names in themselves – PANIC BEATS stands as one of the late legend’s most instantly accessible and most brutally entertaining films.