Eurohorror of the Week: Orloff Against the Invisible Man (1970) 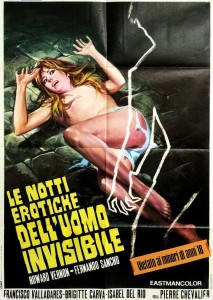 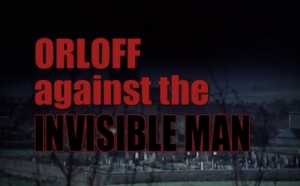 There’s more than just Howard Vernon playing a character called Orloff to make this Spanish/French co-production look and feel like a Jess Franco film, but it must be said that the resemblance is more to that mad genius’s sloppiest works than his finest. Yes, it’s that bad.

A pretty threadbare plot sees new local doctor Garondin (Francis Valladares) summoned to the titular professor’s castle, where it’s revealed that a blood-drinking invisible entity of Orloff’s creation prowls the corridors – when it isn’t undertaking helpful but mundane tasks like opening doors and carrying lanterns, that is.

I’m not usually one for spoilers here, but the element of surprise frankly won’t help when the ‘Invisible Man’ is ultimately revealed to be a guy in a fancy dress gorilla costume. This ‘monster’ is also despatched far too easily, and where the hell is Orloff at the end? And the climactic ‘fire’, far from being the usual Hammer blaze, is represented by a smoke machine blowing though the odd doorway or window. Then again, this being 1970, maybe the whole crew just took a cigarette break at the same time. 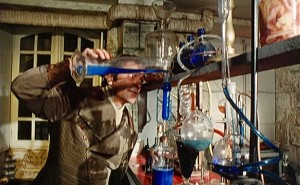 Vernon is his usual engaging self, but that’s not enough to rescue this undercooked stew. Fresh-faced ‘good guy’ lead Valladares is as wooden as they come, and the hardworking Fernando Sancho, here at the outset of his Eurohorror phase after countless westerns, looks embarrassed to even be there. As for the female cast members, chief amongst which being Brigitte Carva as Orloff’s daughter, they show that while their acting skills may be non-existent, they do have other talents. Like taking all their clothes off really quickly. And frequently. 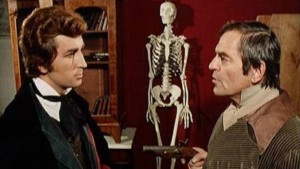 Some ginchy invisibility effects are supplied by Chevalier’s co-writer Juan Fortuny, who also co-wrote and directed the equally risible (and barely comprehensible) Crimson / The Man with the Severed Head (1973), starring Paul Naschy. Not at all convincing, but I guess we can’t see any strings.

However, in the case of many a Eurohorror it’s all about atmosphere more than a fully cohesive plot, and the film does at least manage to elicit a little of this by default, thanks to being mostly shot on location in a real olde-worldy European castle – well, château at least. All the crumbling locations used look authentic, lived-in, and pretty much true to the unspecified period within which it’s set. Okay, this isn’t in any part due to the filmmakers – all they had to do was turn up, set up their cameras, and get the actors changed out of their street clothes – but this at least lends an ambience pleasing enough for a fan of the genre to fall asleep in. As I did on the first two occasions that I attempted to watch it.