Eurohorror of the Week: The Night of the Sorcerers (1974) 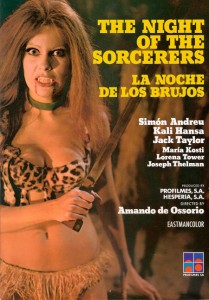 Eurohorror doesn’t get much more kitsch and sleazy than this ‘Tiki Nightmare’ from key Spanish director Amando De Ossorio, better known of course for his Blind Dead series. La noche de los brujos is an exercise in pure madness and surely the greatest ever horror film to feature peroxide blonde leopardskin-bikini-wearing vampire women as its main threat.

A pre-credits sequence finds us in ‘Bumbasa’ in 1910, where we see a British missionary (Bárbara Rey) brutally flogged, raped, and finally decapitated by members of a Voodoo cult. At that very moment, a troop of limey soldiers stumbles on the shocking scene and fills the entire assemblage with lead. You may think that’s quite enough, pre-credits, but there is no preparation for the moment when the dead woman’s head jumps up of its own accord, turns around to face the viewer and screams, baring a fine new pair of vampire fangs. Wow! 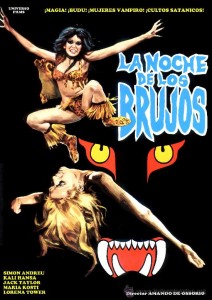 Don’t get too excited, this is about as good as it gets. Flash forward to the seventies, and a party of jungle explorers investigating a decline in the elephant population becomes plagued by the ghosts of the cult, their chief emissary being the vampiric Agnes from the opening scene. Who will survive, and (more importantly) who is destined to join the ranks of peroxide blonde leopardskin-bikini-wearing vampire women?

It’s difficult to know where to start with this one. By all normal critical standards it is indeed a terrible movie; in fact laughably bad, in numerous aspects. The storyline doesn’t make a jot of sense (hardly unusual in Eurohorror), and the stereotype, degenerate “natives” would be offensive if the rest of the affair didn’t seem so wholly lacking in guile that pure naivety is a plausible excuse. However, taken purely as camp and raunchy horror fun the film is nigh irresistible. 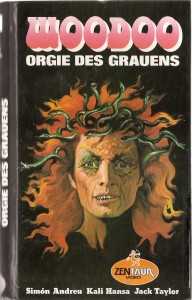 The cast is a decent Eurocult assemblage. Stalwart Simón Andreu is the macho hunter leading the expedition and Jack Taylor is the professor along for the trip. Another Jess Franco collab, the stunning Kali Hansa, is memorable in the thankless role of Andreu’s mixed race girlfriend, Tunika. If her role was intended by Ossorio to atone slightly for the colonialist representations of the “natives” here, then he blew it: the way Tunika is written makes her come across as a needy, insecure idiot.

Budget limitations see to it that much of La noche is filmed on a filmed on a Spanish park, with studio work and stock footage of pelicans and such filling in the gaps. The illusion does hold fairly well for the most part, except in some truly awful day-for-night scenes. The real problem is with Ossorio’s concept and script.

An early love /sex scene between Andreu and Hansa goes on for so long that you might actually forget what you’re watching. The vampire women aren’t interested in Jack Taylor’s blood and are all too happy just to drown him in his own photo development fluid. Then he inexplicably arises as some sort of zombie. And why go to the trouble of chopping women’s heads off only to fasten them back on with green chokers? Meaning that they drop dead the moment said chokers are removed? Was going to mention the leopardskin too, but we like the leopardskin. The leopardskin stays. 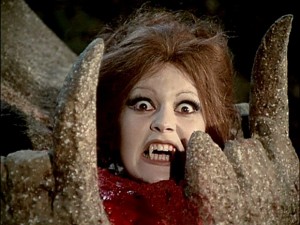 La noche de los brujos comes across as a ‘quickie’, rushed out to play second fiddle to a better film, and it’s certainly the runt of the litter when it comes to Ossorio’s seventies output. But, thanks to those jumping, screaming vampire head scenes it’ll forever be embedded in your psyche. One could argue that you might be better off saving some time by just watching a gif of one of them, but then you won’t get to see the sublime Leon Klimovsky-esque scenes of peroxide blonde leopardskin-bikini-wearing vampire women roaming around the jungle in slow motion.

One for the slush pile or Bad Movie Gold? Put me in the latter camp.