Eurohorror of the Week: The Night of the Devils (1972)

Although best known to horror movie fans for 1960’s MILL OF THE STONE WOMEN, the late Giorgio Ferroni was a highly prolific director in the peplum (‘sword and sandal’) and western genres, with LA NOTTE DEI DIAVOLI (US/UK: THE NIGHT OF THE DEVILS) being his only other horror film, over a decade later.

This Italian/Spanish co-production is based on an 1884 novella by Aleksey Konstantinovich Tolstoy (second cousin of WAR AND PEACE author Leo) entitled ‘The Family of the Vourdalak’, which also formed the basis of ‘The Wurdulak’ episode in Mario Bava’s better-known I TRE VOLTI DELLA PAURA (US: BLACK SABBATH, 1963). Whereas MILL and the Bava film were luridly coloured and lush Gothic gems, largely working on the power of suggestion, the a-changing times saw to it that Ferroni’s 1972 genre offering has the added ingredients of copious gore and a smattering of full-frontal female (natch) nudity. 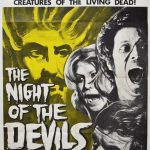 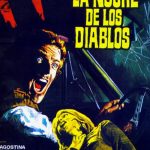 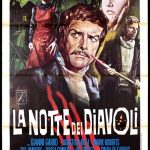 Not long after the opening credits, we’re assailed by an insane montage featuring plenty of both. Sinister, violent and sexual scenes are briefly glimpsed against a dreamlike black background, the air thick with ceremonial smoke. They’re the confused, fractured mental impressions of one Nicola (Gianni Garko), who is presently being admitted into a sanatorium, looking like he’s been dragged though a hedge backwards, and suffering from amnesia as the result of some recent trauma. Under the care of the sanatorium’s Dr Tosi (Umberto Raho of BIRD WITH THE CRYSTAL PLUMAGE), the patient is still unsettled, but when a young woman named Sdenka (Agostina Belli) turns up to see him, he loses his shit completely and is confined to a strait-jacket.

As Nicola’s memory of the events is triggered, we flash back to a couple of days earlier, where we find him on a long drive out to somewhere in the then-Yugoslavia to buy timber. While navigating a treacherous dirt road through some thick forest, Nicola is startled by an old woman running into it, and swerves off into the nearest tree. The woods are remote and deserted, but he happens upon the abode of the Ciuvelak family, and agrees to spend a slightly awkward night with them there while eldest son Jovan (Roberto Maldera) repairs his wheels. 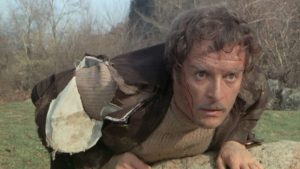 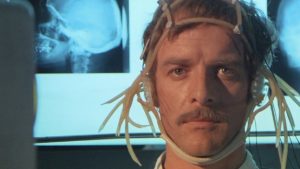 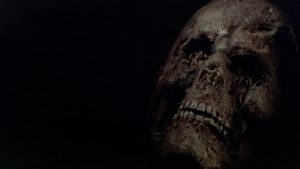 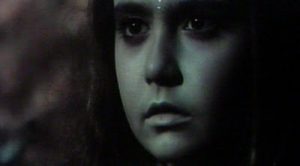 Old Gorca (Bill Vanders) is at the head of the family, which is Jovan and Elena (Teresa Gimpera), younger brother Vlado (Luis Suárez), two younger children, and Sdenka, who we’ve already met. But all is not well in this household. A ‘Witch’ (Maria Monti) is on the loose, that has already claimed the life of Gorca’s brother, and who must be destroyed lest she infect other family members with an undead curse which would  transform them into ‘Vourdalak’; vampire/zombie-like creatures that putrefy before the very eyes when staked in the heart. Gorca sets out to destroy the monster, agreeing with Jovan that Gorca himself be staked if he returns any later than six. The old man returns right on the last stroke of the hour, with evidence that the witch is slain – but is he man, or Vourdalak?

What NIGHT OF THE DEVILS may lack in terms of the ‘adult fairytale’ quality of Bava’s earlier adaptation, it more than makes up for with creepy rural ambience and gory shocks. Without a giant like Karloff at the centre of it, the other characters have more space to breathe, and Garko’s Nicola is certainly a more memorable hero than Mark Damon’s ‘Vladimir’ was in Bava’s classic. The film  may update the action to the present day, but Nicola, and we the viewers through him, step back a hundred years into the past once he enters the Ciuvelak farmhouse. The concept of vampires, or vampire-like creatures, coming back to find those they loved in life to keep them company goes way back to ancient folklore. Only Nicola and his car are there to represent the modern world. It’s almost jarring when we’re firmly back in the present at the sanatorium where, terrifying backstory now told, the final act of this tragedy will be played out. 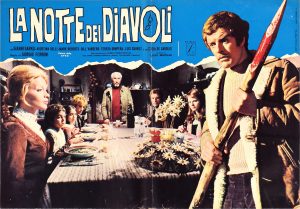 Garko, best known for his recurring role as the titular SARTANA in all but one of  five entries in the popular spaghetti western series, is convincing as the modern interloper into the family’s nightmare, and Belli’s Sdenka perfectly encapsulates this sheltered young woman who’s only ever been into a modern city to go Christmas shopping. The small daughter, Irina, is played by Cinzia De Carolis; instantly recognisable to Argentophiles as ‘Lori’ from the previous year’s CAT O’ NINE TAILS, and just as in that film a little porcelain doll that invites the protective urges of the adult audience, albeit on this occasion later becoming a site of unease and uncanniness herself.

The haunting score by Giorgio Gaslini is by turns gorgeous and terrifying, and gorgeously terrifying. The eerie folk-horror feel it lends to scenes where ‘The Witch’ runs through the forest and the Morricone-esque wordless female vocal of the main theme linger in the memory long after the film has rolled. The gore effects from maestro Carlo Rambaldi may be somewhat dated, but are still juicy enough to do the trick. Credited here simply as ‘Rambaldi’, he’d recently been working extensively with Bava, and famously went on to win Oscars for his work on ALIEN and E.T: THE EXTRA-TERRESTRIAL. 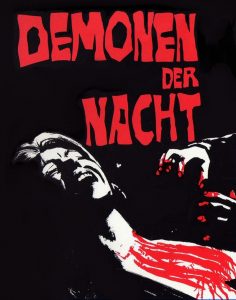 Anything but by-the-numbers, and more eerily effective (not to mention gory) than anything Hammer and the likes were making at the time, NIGHT OF THE DEVILS is a fine example of early seventies Eurohorror which, like MILL OF THE STONE WOMEN, makes this viewer for one wish that Ferroni had done more such work in our favourite genre.