Having already notched up memorable appearances in Mario Bava’s BAY OF BLOOD (1971) and BARON BLOOD (1972), Aldo Lado’s WHO SAW HER DIE? (1972), and Paul Morrissey’s FLESH FOR FRANKENSTEIN (1973), it was only a matter of time before the considerable creepy charms of busy child actress Nicoletta Elmi were employed in the service of the post-EXORCIST kid-possession subgenre. The resulting film, from WHAT HAVE YOU DONE TO SOLANGE? (1971) director Massimo Dallamano, is arguably her finest hour.

Also known as THE CURSED MEDALLION – its original Italian title is IL MEDAGLIONE INSANGUINATO, with ‘PERCHÉ?!’ (‘Why?!’) weirdly tagged on in brackets for good measure – it marks a rare foray into supernatural horror for the underrated director. 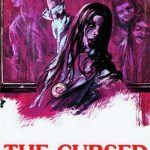 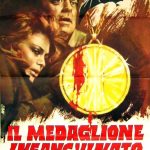 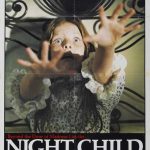 Young Emily (Elmi) seems to be suffering from post-traumatic stress, as would most if they’d witnessed their mother come crashing through a second story window in flames. Her father Michael (Richard Johnson of ZOMBIE FLESH EATERS) is a well-known TV art historian (remember those?), and taking Emily with him on trip to Italy while he films his latest documentary looks like it could be just the tonic.

However, Michael has become obsessed with a demonic Hieronymus Bosch styled painting on a slide that he can’t identify, having no information at all to work on. On arriving in the picturesque ancient town of Spoleto with Emily and her nanny, Jill (a fragile-looking Ida Galli, here dubbed ‘Evelyne Stewart’ as the giallo regular often was), he’s housed in a nice old crumbling villa, and quickly finds himself falling for the charms of Joanna (Joanna Cassidy, BLADE RUNNER’s ‘Zhora’), the show’s chilled-out American producer.
But all is not well as Emily starts to experience terrifying waking nightmares where she’s pursued though those very streets by a taunting mob of wizened, toothless villagers, and Michael learns more about the painting’s dark past and its link to the titular medallion that Emily now wears. Cue Emily starting to act up big-time. When Jill takes a tumble off a cliff in mysterious circumstances, there’s no denying that Satanic forces are abroad as we lurch toward the tragic climax. 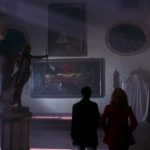 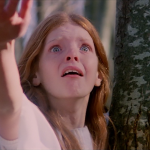 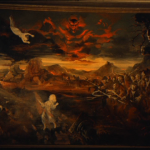 Dallamano’s film is light on gore, pea soup, and screamed obscenities, but drenched in creepy atmosphere. Along with this, the viewer is kept interested by the human drama; Jill is secretly in love with Michael and is crushed by his budding relationship with Joanna, Emily’s resentment of Joanna becomes potentially lethal as the possession takes hold. The possession aspect aside, at no point does THE NIGHT CHILD openly ape the original Friedkin film in the way that, say, BEYOND THE DOOR (1974) or EXORCISM (1975) do.

Young Elmi succeeds admirably here in a very tricky, pivotal role, and it’s hard to imagine another child actor of the period pulling it off better. Adult leads Johnson, Cassidy, and Galli are as solid and credible as they come, and their interplay is what keeps the film focussed and on-track. Special mention should also go to a wonderful turn from Oscar-winning actress Lila Kedrova as the eccentric Countessa Capelli, the only person with a clue to what is actually going on. THE STUDENT PRINCE (1954) and future ABSURD (1981) star Edmund Purdom puts in a brief but high-billed early appearance as the family doctor who suggests the whole ‘Italy trip’ idea in the first place.

The film is as visually ravishing as one might expect from Dallamano, seeing as he was responsible for the cinematography on Sergio Leone classics A FISTFUL OF DOLLARS (1964) and FOR A FEW DOLLARS MORE (1965, both as ‘Jack Dalmas’). The honours here, though, go to Franco Delli Colli, who also served as DoP on Dallamano’s WHAT HAVE THEY DONE TO YOUR DAUGHTERS? (1974). The scenes set in the condemned chapel where the evil painting is kept have a stunning painterly feel, calculated for maximum creepiness. By day bright shafts of sunlight penetrate the windows; by night it really does feel like the kind of place where you wouldn’t want to hang out.

Sequences filmed in the historical town at night approach the sublimity of similar scenes in Bava’s KILL, BABY… KILL! (1966), with which this tale has other obvious parallels. Luckily this one didn’t end up being saddled with quite such a stupid title. The film also boasts a rare Italian exploitation appearance of BBC Television Centre, and British history or psychogeography fans can also have fun checking out what the inroads to Heathrow Airport looked like in 1975. 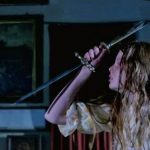 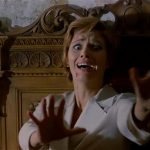 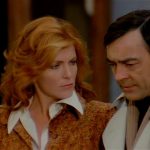 A beautiful score from Stelvio Cipriani is also an indispensable element of the film’s texture, with variations of the haunting main theme returning frequently to remind us that this is ultimately a very sad story. All things considered, THE NIGHT CHILD is yet another example of talented Italian filmmakers taking a popular hit as their template, but still creating something with a definite personality and feel of its own within that, like jazz virtuosos riffing on a standard. It may not be as shocking or extreme as a some of the other EXORCIST-inspired efforts of the period, but it’s easily one of the best.