Eurohorror of the Week: Mill of the Stone Women (1960) 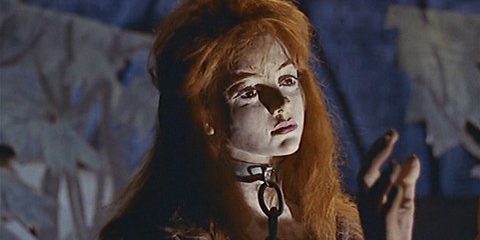 1960 saw the groundswell of a cinematic horror resurgence in Italy, despite the disappointing turnout for Riccardo Freda and Mario Bava’s early effort I VAMPIRI in 1957. Hammer’s CURSE OF FRANKENSTEIN and (HORROR OF) DRACULA had since done big business over there, so the time was right to get on the ghoulish bandwagon. Little did these filmmakers know that they were also opening the floodgates wide for an almost thirty year torrent of Eurohorror that was to follow. 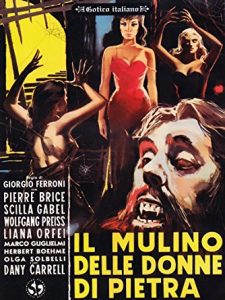 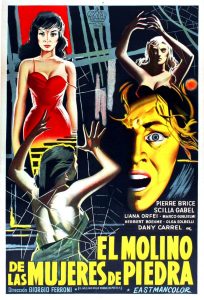 Although the export success of Bava’s BLACK SUNDAY was a major catalyst in this, it doesn’t pay to overlook its small clutch of contemporaries, including this Italian/French co-production, released as either IL MULINO DELLE DONNA DI PIETRA or LE MOULIN DES SUPPLICES, depending on which of those countries you happened to be in. It was the first Italian horror film to be shot in colour.

Directed by veteran peplum and western specialist Giorgio Ferroni, MILL OF THE STONE WOMEN seems to take its cues from Warner’s 1953 HOUSE OF WAX and the previous year’s EYES WITHOUT A FACE. It’s turn of the 20th century Holland, and Hans (Pierre Brice), a young assistant at a Rotterdam University, arrives at the windmill of famous sculptor Professor Gregorius Wahl (Herbert Böehme) to document the latter’s unusual carousel exhibit, powered by the windmill itself. This ghastly rotating tableau featuring effigies of infamous female murderers of history is popular with the clog-wearing locals, but Hans ends up spending more time studying Wahl’s beautiful but more-than-a-tad-strange daughter Elfie (Scilla Gabel), despite having equally gorgeous girlfriend Liselotte (Dany Carrel) waiting for him back on campus.

The plot thickens when Elfie suddenly drops dead and starts to petrify before Hans’s Very Eyes, sending Hans off the deep end, and then into delirium when he’s drugged by Wahl’s employee Dr Bohlem (Wolfgang Priess). When Elfie just as suddenly turns out to be alive again, the shifty pair deny all knowledge of her apparent death and, moreover, Hans’ claim that he saw missing dancing girl Annelore (Liana Orfei) tied up in the basement. What is the terrible secret of the MILL OF THE STONE WOMEN that Wahl and Bohlem are so desperate to hide? 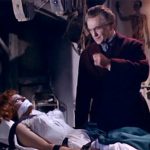 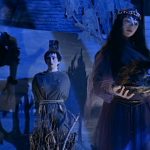 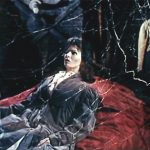 Hammer may have worked wonders on a low budget, but MILL appears much more lavish on what were presumably similar means. The Technicolor is vivid and sumptuous. The windmill interiors are marvellously elaborate, putting one in mind of the Universal classics thanks to a shared German Expressionist influence. Crooked doorframes and long shadows abound. Plaster-cast human heads, limbs, and crucified bodies sprout from the walls and weird religious icons are all over the place. The few outdoor scenes have an undeniably eerie texture, particularly those on the misty canal-side on  the way to Wahl’s mill. In the opening scene in particular, much of this is due to Carlo Innocenzi’s wonderfully ethereal music. There’s just something about it that causes the hair on the neck to prick up when allied with these visuals.

Master Hammer artisan Terence Fisher famously described his films as ‘fairy tales for adults’, and MILL OF THE STONE WOMEN certainly meets that description also. It’s slow-moving and talky by today’s standards – of course it is – but patience and close attention have their rewards. Former Sophia Loren stand-in Scilla Gabel is perfect in the role of Elfie, appropriately fragile and brittle-looking, while still remaining divinely pulchritudinous. The tragic, otherworldly figure of Elfie maintains our sympathy until the last reel, when find her taunting a bound and gagged Liselotte, in anticipation of replacing her in Hans’s affections – not to mention draining her body completely of blood and having her father disguise her corpse as statue to be hidden in plain sight as part of the carousel. 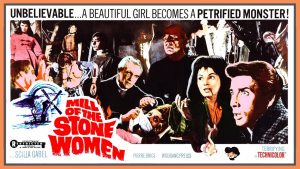 Don’t listen to online morons who dismiss Ferroni’s film as a ‘Bava rip-off’. It was released in the very same month as Bava’s famous debut, so this is obviously not the case. Listen instead to online morons like me, who declare MILL OF THE STONE WOMEN to be a beautiful little horror picture and one of the most visually pleasing and quirky examples of early ‘Horror all’italiana’.