Eurohorror of the Week: The Living Dead At Manchester Morgue (1974) 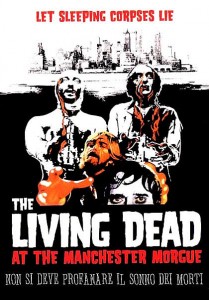 George (Ray Lovelock) and Edna (Cristina Galbó) meet by accident whilst travelling separately to the Lake District – George to stay with some friends and Edna to visit her sister Katie (Jeannine Mestre) and brother-in-law Martin (José Lifante). Strangers to the area, the couple soon come under suspicion with the local police for a series of bizarre murders plaguing the area. However, as George and Edna begin to figure out the real reasons behind the brutal killings, they soon fear that it will only be a matter of time before they all succumb to the inexplicable ‘disease’ which appears to be behind the deaths, in this usually beautiful and tranquil part of northern England.

Complete with downbeat, twist ending, The Living Dead at Manchester Morgue – which holds the unique distinction of having been released internationally under a total of fifteen different titles – is unlike anything which came before or after. Though very much of its time, the film remains a unique and thoroughly unpleasant viewing experience, as applicable today as it was when released over forty years ago in 1974.

From the late 1960s through to the early 1980s, a host of Hollywood stars were happy to feature in an endless array of dubious and horrific potboilers, if it meant keeping their names in the public arena: for many their glittering careers had become little more than fond memories, mostly relived through magazine stills from the days before they found a new fanbase when their films were resurrected via the magic of home video. Some – like Boris Karloff in the psychedelic shocker The Sorcerers (1967) – pulled it off, whilst others were not so lucky: Oscar winner Jack Albertson would probably rather have forgotten his top billing in the patchy 1981 sleaze fest Dead and Buried. 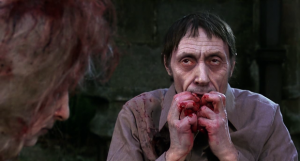 One however who could hold his head high, was iconic American character actor Arthur Kennedy. By 1974 he was sixty years old and his glory days in cult classics like Lawrence of Arabia (1962) were long past. As a result he may have taken the role of a bitter and irritable detective in The Living Dead at Manchester Morgue more from necessity than initial desire for the material. Despite the fact his character has no redeeming qualities at all – obviously designed to garner sympathy for the innocent and misunderstood young protagonists George and Edna – his character nonetheless plays a pivotal part in the proceedings, making it more than simply a token representation of the law.

Kennedy aside, it is Spanish actor Ray Lovelock and actress Cristina Galbó who hold the film together. As George and Edna, who meet by sheer fluke and who’s initial dislike soon turns to mutual respect and affection after being forced to rely on each other as the onslaught of the undead sets in, they bring a sense of realism to their increasingly desperate plight. It of course also helps they are a highly attractive and hip couple – in a 70s fashion – who a contemporary younger audience would have been able to relate to. 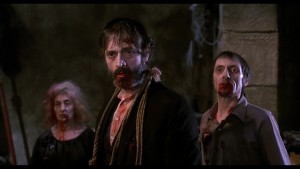 As far as the film’s real horror qualifications are concerned, it’s not hard to see why it is often heralded by fans and critics alike, as one of the best zombie movies ever produced. Exquisitely shot, it’s depiction of the tranquil and remote beauty of England’s Lake District only serves to heighten the physical horrors once they take place, scenes which are unbelievably graphic and realistic for the age in which the film was made. Only six short years after George A. Romero’s groundbreaking Night of the Living Dead (1968), here is a film which doesn’t cut away when the animated Lancashire corpses chow down in loving, lingering detail on livers, spleens and endless mouthfuls of realistically sloppy intestines. One of the film’s most notorious scenes concerning the grisly demise of a hospital receptionist – where some ravenous inmates literally start with her breasts and work their way down – will likely have even those with cast iron constitutions turn green with nausea. Though made in Britain, and featuring an American actor in a lead role, everything else about the film is strictly European. Being an Italian / Spanish co-production may go some way to explaining the film’s more liberal attitude to the female body and a degree of full-on visceral grittiness not seen in British horror cinema of the time, which was still in the grip of studios like Hammer who’s films in comparison appeared positively restrained. 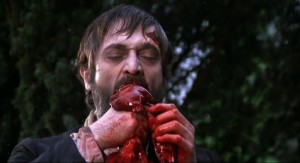 As much as the film’s grim goriness or hypnotic beauty, it is its serious approach to its story basis which makes it not only convincing (to a point) but also relevant. Unlike other films in this popular sub-genre which have based the reanimation of the dead in the inexplicable or supernatural, here is one which puts the blame squarely on the shoulders of man in his constant quest for advancement to the detriment of the environment. From the opening scenes of George escaping a smog choked city – it’s identity never being fully established, only enhances the message that this could be happening anywhere – to the actual means which unwittingly wakes the dead, everything is coloured by a subtle, underlying warning. What can be seen in many ways as progression, may in fact be the ultimate cause of our destruction.