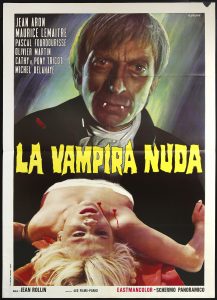 ‘THE NUDE VAMPIRE’ was only Rollin’s second feature film (and his first in colour), but already the tropes are in place, along with cast members that would frequently return. A young man named Pierre (Olivier Rollin, Jean’s brother) stumbles on a bizarre suicide cult, which quickly turns out to be presided over by his father, Radamante (Maurice Lemaître), a filthy rich and unapologetically decadent industrialist and aristocrat.

The focus of this strange mask-wearing sect is a nameless captive ‘vampire’ (Christine François), that Radamante and his two associates are experimenting on in order to discover the secrets of eternal life for themselves. Outraged by all this, Pierre vows to expose them, and soon comes into the orbit of the enigmatic, cape-clad ‘Grandmaster’ (Michel Delahaye), who along with his vampire brethren is bent on freeing their fellow blood-drinker and bringing a reckoning to the three aristos. However, we eventually discover that these are not vampires as we know them at all, but something altogether more ‘out of this world’…

It takes a certain sensibility to appreciate Rollin – BLADE or TWILIGHT this certainly ain’t. The late director stated that he conceived LA VAMPIRE NUE as “a mystery film” and, sure enough, at the outset the beguiled viewer struggles to make sense of what the hell exactly is going on. But beyond the mystery, there is also the feel of a comic strip, thanks to the outlandish costumes and ‘generic’ horror tropes – along with the surrealists, Rollin was also heavily influenced by the work of comic artist Philippe Druillet, who also designed the spectacular posters for his early films. There is also a crime film element where, in fighting off the ‘vampires’, Radamante and his associates become like cornered 1930s Hollywood gangsters in their futile attempts to mow them down with a tommy gun, and the lab scenes and final revelations see the narrative bleed into science fiction territory. The erotic element, with scantily or exotically clad (or not clad at all) young women writhing and gyrating with wild abandon all over the shop, probably goes without saying. 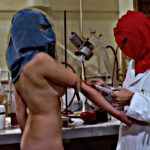 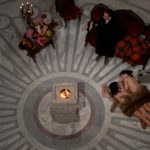 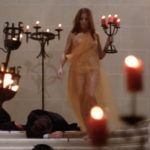 Subversively, the vampires (representing sex and death), are in no way the villains here, but instead the bourgeois industrialists, and the climax brings an inversion of the tried and tested Universal/Hammer ending wherein it is the vampires that storm the château with their burning torches aloft. However, when it comes to the objectification of women, the film (along with the rest of Rollin’s output) is without a doubt guilty as charged. But this in no way compromises Rollin as an artist – after all, the French genre film at that time was an industry based on sex (simultaneously engaging with the then-ongoing ‘sexual revolution’ and providing something declining cinema audiences couldn’t see by simply staying at home and watching TV), and, what’s more, in the context of his work he was carrying on what was something of a surrealist ‘tradition’, for good or ill. And ultimately, throughout his work it is women, albeit usually of the vampiric variety, who end up wielding the power.

‘Surreal’ and ‘non-linear’ are words that tend to be freely bandied about in discussions of Rollin’s work and the former, as we’ve seen, is certainly accurate. But beneath the undeniably surrealist texture, the narrative of LA VAMPIRE NUE is completely l 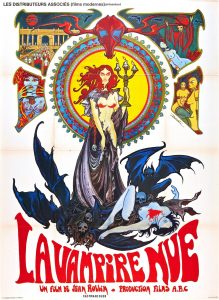 inear, going from A to B in an orderly, if highly unusual, fashion that actually makes sense – as is the case with most of his work if one pays close enough attention.

The Cahiérs du Cinema critics that first popularised the term would surely have choked on their Gitanes and fallen about laughing at the merest suggestion that Rollin was an ‘auteur’. Today it’s clear that he was, even if that vision was compromised as his chequered career wore on. DISCO SEX or ZOMBIE LAKE, anyone? However, one could easily say that of most directors, in some way or another. The appellation may have become largely meaningless today through overuse but, as far as Rollin is concerned, the cap still fits, and LA VAMPIRE NUE stands amongst the best and most representative examples of his work.