Aficionados of films which fall within the ‘Eurohorror’ bracket – which, for much of the time, encompass those made post 1960 and frequently focus heavily on stylised gore – often forget that deep seated fear and unease can be brought about as much by suggested beauty as by the grotesque. Take for instance La Belle et la bête, the French filmmaker Jean Cocteau’s fantastical cinematic interpretation of the macabre fairytale Beauty and the Beast. 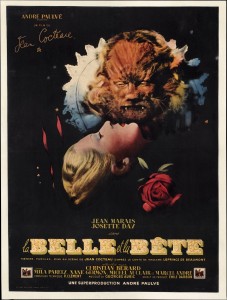 A once successful French merchant (Marcel André) is now fighting to make ends meet, having lost most of his goods at sea. Setting out on yet another business trip the merchant asks his daughters what each would like him to bring back. His two elder ones – haughty and vain – demand expensive gifts, whilst Belle (Josette Day), his beautiful younger daughter, requests a simple rose as there are no longer any in their own garden. Returning home from his trip the merchant looses his way and finds himself in the grounds of a beautiful chateau in which grow the most entrancing roses, one of which he plucks for Belle. Suddenly, as though from nowhere, the chateau’s owner appears: a truly fearful beast (Jean Marais) who claims that his roses mean more to him than life itself, he demands a terrible price from the merchant for such a wicked transgression.

Here is a film which, lacking in the trappings of violence usually associated with the horror genre, none-the-less stirs up an equally disturbing ambience for the viewer. Though it may be composed of a cavalcade of magical visuals, its most disturbing elements are to be found in Belle’s shallow and bitter family and friends: her vain, self obsessed sisters Adélaïde (Nane Germon) and Félicie (Mila Parély), feckless wastrel of a brother Ludovic (Michel Auclair), her weak, easily influenced father and scheming suitor Avenant (Marais). These are only emphasised when later juxtaposed with the Beast himself – his animal side, brought to life by amazingly realistic make-up, hidden beneath expensive and princely garb – whose true nature shows him as much less of a ‘monster’ than many of the film’s more outwardly normal characters. 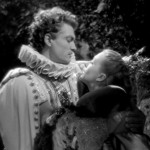 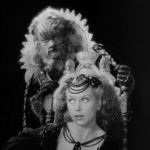 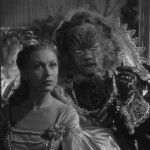 Save for the occasional scene which conjures moments of real shock – at one point the Beast, in a state of semi-undress having succumbed to the darker side of his nature, reminds you of Oliver Reed’s Leon in Hammer’s The Curse of the Werewolf (1961) – much of the horror in the film comes from the endless array of surreal settings and imagined environs in which its storyline plays out. From Belle’s father’s down-at-heel house which evokes the sense of the home of a once rich family now down-on-its-luck, to the mysterious, ornate chateau where the melancholic Beast idles his life away in decadent grandeur, everything about La Belle et la bête has the unmistakable and surreal touch of its mastermind, Jean Cocteau. Filmed on location, the manor-house of Rochecorbon in Touron doubled as Belle’s family home and captured perfectly the air of a rustic French idyll, whilst the heavily vegetated and statue littered grounds of Louis XVIII’s Chateau de Raray near Senlis were tailor-made for the rambling and ethereal environs of the Beast’s isolated abode. 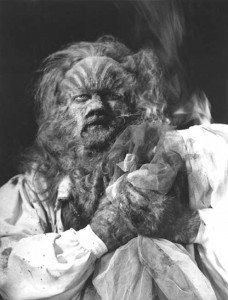 It was inside this dreamlike lair however where Cocteau’s sense of the grotesque took over. Both Belle’s father on his initial visit to the chateau, where he finds himself after becoming lost in the surrounding woods during a late night journey, and later Belle herself when she becomes the houseguest of the Beast, are subjected to a display of bizarre and frightening visions – from doors which open of their own accord to disembodied hands that light the way down endless corridors and pour wine at tables which groan under the weight of lavish and sumptuous feasts. Equally the fact the chateau’s primary rooms appear to have no walls, but open into boundless dark voids or gardens which encroach at the edges of reality, simply adds to to the overall dreamlike feeling which pervades every aspect of the film.

An artist, writer and filmmaker, Cocteau was a man who revelled in immersing himself in every part of the moviemaking process – here he was not only director and writer but also voiced one of the lesser characters. His artistic and vivid imagination is given free rein in the imagining of the legendary French fairytale with at times wild and alarming results. On one occasion when Belle is given leave by the Beast to visit her ill father, one of her sisters attempts to steal a string of pearls Belle is wearing, only to have them transform into a vine-like rope in her hands. At another time when the Beast appears to Belle – having just succumb to his base instincts and killed an unseen animal offscreen – he begs her forgiveness, proffering outstretched paws around which the smoke of death swirls ominously. 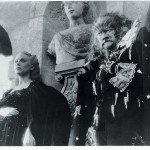 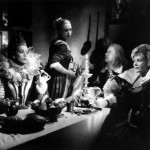 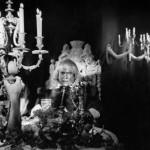 The story may end well for Belle and the Beast, but not necessarily so for its other characters. Only Avenant’s fate is shown on screen whilst the Beast, now transformed into a handsome and courtly prince, reveals to Belle what the future holds for the other members of her family which, in keeping with the often dark conclusions of the original fairytales, may not be altogether happy. The viewer on-the-other-hand can relax in the knowledge that they have had the joy of experiencing the work of one of the true geniuses of the cinema of the fantastique.