Eurohorror of the Week: The Killer Reserved Nine Seats (1974) 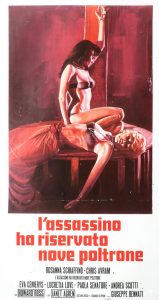 Synposis:
A bunch of bored aristos bail out of a party and pull up at a neglected gothic theatre belonging to one of their number, there to spend the night – well, sniping at each other it would seem. Theatre-owner and birthday-boy Frank Davenant (Chris Avram of Bay of Blood) is chief fat cat amongst these, and it appears that everyone there wants something out of him, be it his pill-poppin’ daughter Rebecca (Eva Czemerys) or misogynistic pisshead Russell (Howard Ross).

Before long Frank barely manages to dodge a falling beam that clearly had his name on it, but when Pat’s fiancée Kim (a very young-looking Janet Agren) is killed onstage while sharing her, erm, unique interpretation of Juliet’s death scene it becomes clear that everyone is fair game for a masked killer that stalks the stalls. But which of one them is it? And who is the mysterious ‘Man in the Nehru Jacket’? 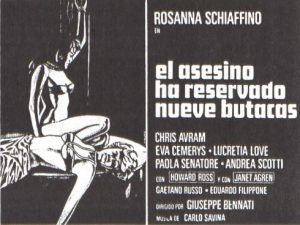 Yep, it’s Ten Little Indians, giallo style. Naturally the ladies all disrobe at any given opportunity and two of their number are lesbians – obviously there for male titillation purposes rather than flying the flag for diversity in film. The fact that there’s a deranged funnyface fright-mask wearing psycho on the rampage doesn’t deter anyone from jumping at the opportunity for a quick grope, nor does it make one jolly japester stop to think that jumping out in the killer’s mask and cape could be anything other than a wizard wheeze. Young Rebecca at one point decides it best to just neck a handful of pills and dance in front of a mirror in a flighty little chiffon number. Yeah, that’ll sort everything out, Bex. Good call.

Although the plot depends largely on everyone behaving like complete bell-ends, and becomes even more muddled when a supernatural element comes into play, the film does benefit from a surfeit of style, with the low budget belied by the opulent setting and some gorgeous cinematography from old hand Giuseppe (An Angel for Satan) Aquari, not to mention a pleasing score from Carlo Savina. The cast do a good job of taking everything seriously, with top-billed Rosanna Schiaffino standing out as Vivian, Frank’s ex-fiancée with a dodgy past. And the murders? Yep, they’re sufficiently gruesome to allow the film to enter the Giallo Hall of ‘Fame’. 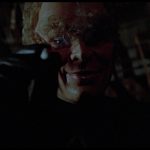 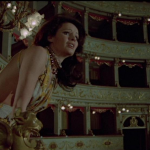 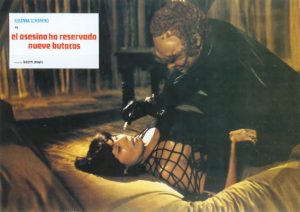 L’assassino ha riservato nove poltrone was director Giuseppe Bennati’s sole foray into the genre, and producer Dario Rossini’s one and only film credit. As you’ve probably gathered it’s flawed to say the very least, but it’s stylish and engaging enough to make it seem a shame that Bennati never got the chance to hone his craft a little with further entries.