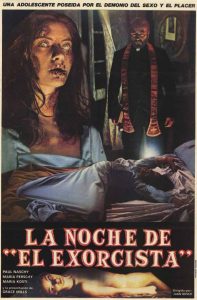 The release of THE EXORCIST in 1973 had a drastic effect on the horror movie landscape. Audience interest in werewolves, vampires, and cobweb-strewn castles had already started to wane, but Friedkin’s film spelled its death-knell, at least temporarily. Bad news for old-school fright pedlars like the UK’s Hammer Films and the ‘Spanish Lon Chaney’, Paul Naschy.

EXORCISMO (original Spanish title) was Naschy’s response to this (Hammer’s was TO THE DEVIL A DAUGHTER, which in 1976 was too little, too late), but it never colours too far out of the lines of its American template. Starring and based on a story by Naschy, it was directed by paella western and giallo veteran Juan Bosch. Naschy claimed that he wrote the script before the Friedkin film was unleashed onto a shocked world. This we can accept up to a point, but it’s probably a safe bet that the swivelled-around heads, pea-soup-vomiting, and bed levitation were later additions. Like, after THE EXORCIST additions.

We start out like gangbusters with a bunch of hippies on a beach, well in the throes of a drug-fuelled Satanic ritual, while wordless female vocals moan and electric guitars wail on Alberto Argudo’s groovy soundtrack. These guys are partyin’ like it’s 1969. However, young Leila (Mercedes Molina – Anglicised into ‘Grace Mills’) and her free-love-shag-buddy Richard (Roger Leveder) have obviously been enjoying all this sex, drugs n’ rock ‘n’ roll a mite too much, judging by the way they career over a hillside in their car, landing Leila in hospital. Her concerned brother John (Juan Llaneras) calls for old family friend Father Adrian Dunning (Naschy), pipe-smoking priest and eminent scholar of witchcraft and folklore. 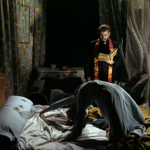 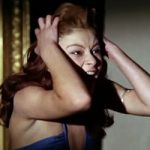 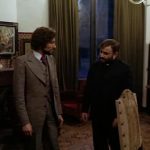 Much to the consternation of her mother (Maria Perschy) and sister (María Kosty), Leila starts acting very strangely on her return from the hospital, evincing such ‘possessed’ behaviours as screaming fits and the shouting of obscenities to the assembled guests at her birthday party. Well, I say ‘obscenities’, but “Get lost! Break your ass!” and “You’re all nothing but stupid-asses!” are about as bad as it gets. Anyway, disturbing enough, one might think, but this coupled with the fact that John has just been found in his greenhouse with his neck twisted all the way around tips Father Dunning off to the fact that there be devilish business afoot. Dodgy young Richard is the next to be found neck-twizzed; can our heroic Exorcist banish the entity that possesses Leila and end this reign of neck-twisty/shouty/screamy terror?

Aside from the fact that we’ve kinda seen this movie before but done better, EXORCISMO is still an entertaining romp. There’s a great second ritual scene, where naked acolytes gyrate to the sound of bongo drums, representing pure, unfiltered Eurocult delirium at its best and undoubtedly the movie’s sleazy high point. It’s get a lot of things wrong, though. For starters, we’re introduced to the hippie Satanist cult – always fun in the movies – but instead of finding out anything else about them, we have interminable scenes of Naschy hob-nobbing with this well-to-do family. 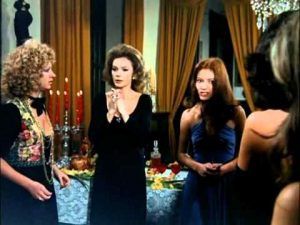 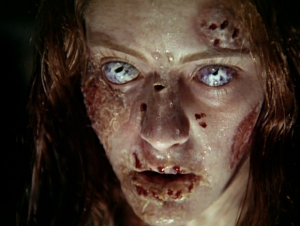 Another problem is that Naschy’s character is just so perfect. There are no crises of faith here, just an encyclopedic knowledge of world folklore, a nice bedside manner, and an all-round sense of human decency. Aside from the fact this doesn’t give the invading demon (in fact the spirit of Leila’s horrible father) any chink in his armour to work with, it just doesn’t make for a very engaging character. Now Waldemar Daninsky (tormented wolfman) and Alaric de Marnac (evil wizard) – they’re what you call exciting Naschy characters.

It doesn’t take a genius to work out that we’re working up to a Big Exorcism scene at the end here, in fact you probably guessed that as soon as you saw the film’s title and year of release. When it finally comes it’s well-staged and watchable enough, but redundant and quite flat at the same time. It’s anti-climatic in that it’s less fun that what has gone before; the ‘mystery’ is out of the way, let’s just get this bloody exorcism business out of the way so we can all go home, eh? 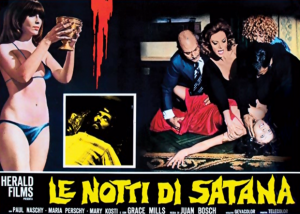 EXORCISMO may be a bit of a wet lettuce in comparison to its famous progenitor, not to mention a pretty vacuous retread, but it’s entertaining enough in its own right if you’re able to see past these things. For the forgiving, it’s an engaging sleazy melodrama of its own before it goes ‘full-Exorcist’, as it were. The performances are generally good, particularly from Naschy, Mills, and co-star Maria Perschy, but the dubbing isn’t, unfortunately, which doesn’t help matters.

Me? I just want to see a movie about that hippie Satanist cult.