Buff Mexican actor Jorge Rivero is Peter Crane, a filthy rich playboy who spends most of his time having wild parties at his super-mod condo in Rome. 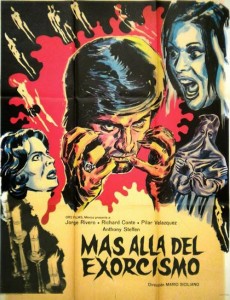 However, this ‘living the dream’ starts to take on a far less enjoyable meaning when he starts to be plagued by some (actually genuinely unsettling) nightmares, where naked figures parade around in the darkness, making arcane gestures and issuing forth a lot of blood-curdling screams, while a sinister KKK-hooded figure in red performs some sort of malefic rite over Crane’s mug shot.

This first couple of minutes is about as scary as it gets. As the dreams persist and he tries to go about his daily life he starts to find that almost anyone (well, usually women actually) he comes into contact with has a nasty habit of turning up dead the next the day, starting with the mysterious Yvonne (Lone Fleming of the first two Blind Dead escapades), who he runs into at the dullest fashion show in film history. With no memory of the incidents, he turns to psychiatrist and old family friend Dr Stone (The Godfahter’s Barzini and Eurocrime stalwart Richard Conte) for help. But is Stone really the caring and professional head doctor that he seems to be?

It has to be said straight off the bat this Italian/Spanish/Mexican co-production from director Mario Siciliano is a Pretty Bloody Stupid Film, but it’s fast paced and sleazy enough to be highly entertaining. There’s a fun cast of familiar Euro faces including spaghetti western star Anthony Steffen as the detective on the case and Django’s Eduardo Fajardo as Crane’s duplicitous butler. And, oh look, there’s Luciano Pigozzi again. 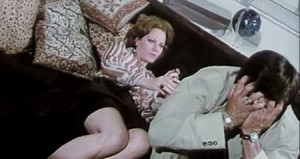 In addition to the dream sequences there’s also a strangely disquieting scene where Steffen rushes to the aid of a woman being set upon by a couple of men on the banks of the Tiber. He turns her over, only for her to fix him with an insidious leer, and, in a moment prefiguring The Omen, the evil forces at work cause a crane to drop its load of bricks; he manages to leap out of the way just in time, but seemingly fails to save the woman. But when he rushes to try and dig her out it turns out that she isn’t there, if she ever was. A few more queasily odd scenes like this  might have served to make this programme-filler a damn sight more memorable.

Sadly, just as the film has finally managed to build up an almighty head of suspense in the last reel – with Peter and a female friend at remote cottage which is virtually being ripped apart by the demonic forces attacking it, and Steffen’s cop racing to get there in time to save them – things go to pieces and, as often can be the case in Eurohorror, we end up with a ‘what?’ ending that seems like it was tacked on at the last minute. 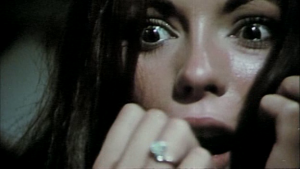 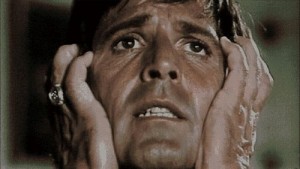 However, we do get to witness the singular cinematic spectacles of Fajardo vomiting up a frog and some possessed cigarette butts swirling around in an ash tray. Yep, an incredibly ropey movie, but maybe just plain bizarre enough to be worth a look.