Eurohorror of the Week: Cannibal Apocalypse (1980)

You’ve experienced Apocalypse Now; now welcome to ‘Apocalypse domani’ (‘Apocalypse Tomorrow’). In the wake of Dawn of the Dead (1978), the success of Fulci’s Zombi 2 / Zombie Flesh Eaters (1979) got Italian producers hip to the fact that an inexpensive international hit could be had from jumping on this gory bandwagon, and for the next couple of years all manner of revenants and cannibals would be seen wreaking bloody havoc in many a future ‘video nasty’. While surely nobody in their right mind would describe any of the films making up this crazed canon as exactly ‘normal’, Margheriti’s contribution is a particularly weird fish. 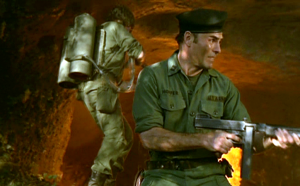 As the film opens, some stock Vietnam helicopter footage gives way to some newly filmed action on the ground where John Saxon leads a detachment of marines to rescue a pair of POWs from a Viet Cong hideout deep in the jungle. And indeed they succeed in their mission, but not before discovering that the two have become bloodthirsty cannibals while imprisoned in their pit, fighting over the remains of an enemy casualty. Saxon gets a nasty bite on the arm from one of them for his trouble – and awakes from this flashback, freaked out, sweaty, and feeling a bit peckish…

It seems that these anthropophaginian (good one that, eh?) desires are symptomatic of a virus, but while Saxon has managed to repress them and lead a normal life, his two ‘Nam buddies haven’t fared so well. They’ve been languishing in the local funny farm all this time, and when one of them is released back into society it sets off a chain of events that will cause terror in the streets and force Saxon to face up to his forbidden longings… one way or another. 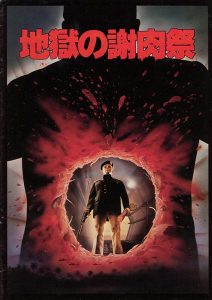 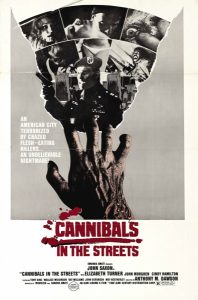 So, in a change from the usual cannibal scenario wherein racist stereotype ‘savages’ feast on westerners (although, admittedly, usually as payback for said whiteys’ transgressions) in the jungle, here Americans bring the jungle back with them and unleash carnage on the streets of Atlanta. It’s a crazy concept, but here it’s also a totally compelling one in spite of numerous flaws in execution.

Much has been said about how ‘dumb’ the idea is. But is it really? Okay, maybe it is, but when you stop to think about it, it’s actually slightly more in the realm of the possible than the reanimated flesh-eating corpses we’ve all come to accept so unquestioningly since Romero started the ball rolling in 1968. Violence as transmittable disease, brought back from a living hell by people who were once ordinary is an irresistible metaphor. The supposed heroes fighting for their country return home only to have become the terrifying ‘Other’, something to be shunned and hunted down. After a sojourn in hell they no longer fit into the ‘rational’ and ‘civilised’ world. Their government wanted killing machines and that’s exactly what they’ve got.

The ‘virus’ here comes across more like an addiction. Those infected are still in possession of their senses most of the time, but when the opportunity arises for a spot of flesh-munching, lascivious looks cross their faces as though they’re in the grip of some some taboo sexual fetish. 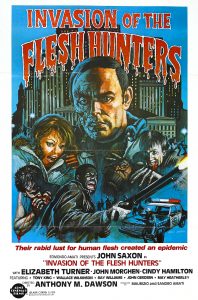 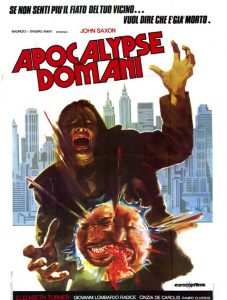 What’s also interesting is that our sympathies remain with the vets and the nurse that joins them (May Heatherly) right until the end. Giovanni “John Morghen” Radice and Tom Thompson’s characters may be barking mad, but if you’ve got group of four being chased though the sewers by cops with flamethrowers, you’re hardly going to root for the cops. The opposition doesn’t inspire much interest: Elizabeth Turner is as dull as dishwater in the role of Saxon’s wife, and Atlanta native Wallace Wilkinson is strictly stereotypical as the lead cop on the case. 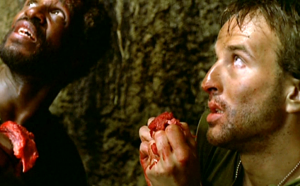 We never get the full scale ‘Invasion of the Flesh Hunters’ that one of its American titles promised, but I guess we do get ‘Cannibals in the Streets’, which was another one. We also get a nice dose of gory, sleazy, gloriously silly, and hard-hitting entertainment. Only at the fag-end of the seventies could we have an opening massacre, with people being blown apart and doused in napalm, playing out to music funkier than James Brown gatecrashing a party at George Clinton’s house. It’s a weird action movie with no real heroes; too bloody for mainstream sheep, not nasty enough for dyed-in-the-wool gore freaks, too weird for action addicts. Like many of these Italian entries, it’s a mishmash of borrowed elements that results in something that ends up entirely unlike the films it’s derived from.

And that, my friends, is exploitation at its finest.