Eurohorror of the Week: The Bloody Judge (1970) 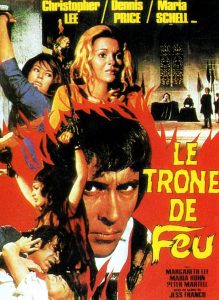 ‘El proceso de las brujas’ is just one of a number of Jess Franco’s collaborations with British exploitation producer Harry Alan Towers between ’68 and ’70, several of them featuring Christopher Lee and most of them Towers’ wife Maria Rohm.

Thanks to the respectable budgets and big name actors this association made available to the late cult director, this would represent his most accessible and celebrated period – soon to run its course with the two permanently parting ways, according to Rohm, after disagreements on the same year’s Count Dracula. It doesn’t represent Franco at his best, but also not his worst by a long chalk.

Clearly wanting to replicate the success of Michael Reeves’ Witchfinder General (1968), Towers found a suitable historical figure to replace that film’s Matthew Hopkins in the form of 17th century ‘Hanging Judge’ George Jeffreys (here Jeffries), usually only seen as a supporting character in adaptations of Lorna Doone. And, in lieu of Vincent Price, we have Lee in the starring role. 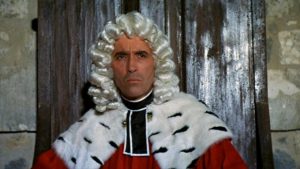 As you might expect, what we get is a costume potboiler with enough sleazy sex and bloody violence thrown in to just about qualify it as a horror picture.

Chris Lee is, well, Chris Lee, all booming voice, not so much chewing up the scenery as swallowing it whole and washing it down with a large glass of Rioja, and seemingly only happy when playing with his organ. Pipe organ that is. The other ingredient of the glue holding the film together is Brit character actor Leo Genn, in the role of wily Lord Wessex, a last minute replacement for Towers/Franco alumni Dennis Price. Although somebody obviously forgot to let the marketing department know about this, judging from contemporary poster art. 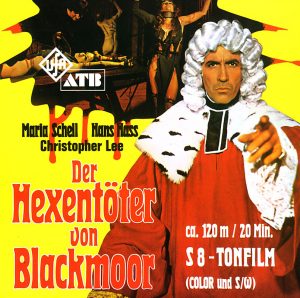 Lee is always at a remove from the sleazier or more violent scenes, suggesting that, as could often be the case when dealing with Messrs Franco and Towers, that they weren’t even present in the version of the script that he saw. In a scene where Jeffries has his wicked way with Maria Rohm, we never see Lee’s face, and the hands of an obvious body double do all the fondling. One imagines that there wasn’t any shortage of takers for that job.

Incredibly uneven and episodic, with totally unerotic sex scenes, the film is still a lot more fun than it probably should be, although some may find it staid compared to the likes of Vampyros Lesbos (1971). Imagine a car crash between a Sunday afternoon BBC2 matinee flick and a Nazisploition epic and you’re halfway there. Franco rarely had better production values to work with, and he provides some sterling location work and cinematography, allied to shrewd art direction and set dressing from one Jack Taylor – who of course any Franco fan knows better from his many collaborations with the director in front of the camera. A fine score from Bruno Nicolai doesn’t hurt either. 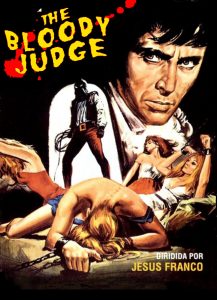 Rohm of course is another Jess regular helping things along, as are Margaret Lee and Maria Schell, but special mention must be made to a maniacal turn from a rail-thin Howard ‘Dr Orlof’ Vernon in exotic leatherette torturer/executioner garb as the gleefully sadistic ‘Ketch’. Here he could even teach Jack Palance a thing or two about overacting, bless him. Eurowestern and giallo fans should also look out for the late Peter Martell (Pietro Martellanza) in the role of doomed rebel ‘Barnaby’.

The Bloody Judge may pale in comparison to Reeves’ folk horror masterpiece, and even Michael Armstrong’s Mark of the Devil (also 1970), but it’s at least enough of an oddity to deserve the cult status it has enjoyed in recent years.