Eurohorror of the Week: The Bloodsucker Leads the Dance (1975) 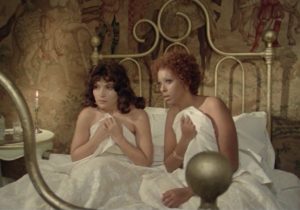 If ever a court case was called to session with the object of forbidding actors from going anywhere near a director’s chair, then ‘La sanguisuga conduce la danza’ could easily be wheeled out as ‘Exhibit A’.

Sometimes credited as ‘Alfred Rice’, Alfredo Rizzo appeared as a character actor in dozens of Italian genre pictures for over forty years, but was unfortunately let loose with a clapperboard on numerous occasions throughout the seventies. If this arrangement did anyone any favours whatsoever, it’s safe to say that it certainly wasn’t cinema audiences. 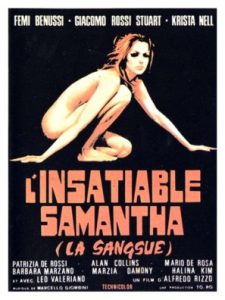 ‘Ireland’, 1902. An all-gal theatre troupe on the verge of disbanding receives a visitation from the ‘enigmatic’ (for this read mealy-mouthed and wearing a cape) and not very Irish Lord Marnak, who, seemingly as some sort of consolation for their going out of business (and not at all because he’s a horny single guy and they’re a bunch of nubile young women), invites them all to spend a few days at his remote castle. Fair play. But just in case he turns out to be some kind of raving psychopath, they agree on the condition that they can bring along their dresser Samuel, a pitiful little eunuch of man who looks as though the simple act of lifting up a newspaper would give him a hernia. There’s no faulting these girls’ logic. I bet their plays were brilliant.

After arriving at the castle and meeting Marnak’s staff of oddballs, they soon learn some family history; not only did Marnak’s grandfather behead his own wife and throw himself from the tower, but so also did Marnak’s father, and, what’s more, Marnak’s 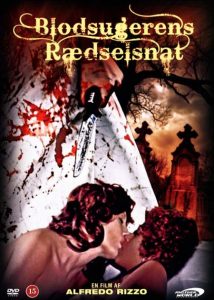 own wife ‘left’ several years ago, never to be heard from again. Oh, and said wife looked exactly like one of their number, Evelyn, who Marnak’s getting along rather well with. It must be said that the girls take all this new intel quite well, and don’t let it interfere with their much needed r ‘n’ r too much. But, sure enough, it’s not long before ladyheads start to roll. Actually, that’s not quite right; it is quite long before this starts to happen; like about an hour into an eighty-odd minute long film.

It’s quite an achievement to make a narrative centering around softcore sex and murder in an opulent gothic castle quite this bloody tedious, but Rizzo pulls it off all the same. After-the-fact murders, wishy-washy cinematography and a dreadful cheesy synth soundtrack that destroys any sense of period all combine to create a dreary potato sack of a movie. The scintillating climax to all this? A ten minute long conversation, explaining everything. And, as if all this wasn’t enough, to add insult to injury there ain’t no bloodsucker leading no goddamn dance. 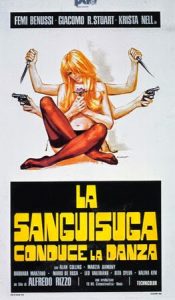 The cast itself isn’t actually that bad; reliable genre vet and sixties leading man Giacomo Rossi-Stuart is Marnak, Femi Benussi (of Strip Nude for Your Killer) is on hand as the obligatory uptight head maid, and our old friend Luciano Pigozzi is in the house as the shifty peeping tom gardener. Austrian actress Krista Nell is entertaining as the sex-hungry Cora; this would sadly be her final film role before succumbing to leukaemia in the same year, making it all the more a shame that this film stands as her epitaph. However, any reasonable work from the above is completely sabotaged by the laughable dialogue, idiotic plot and atrocious dubbing job.

Sometimes these films really are obscure for good reason.