Eurohorror of the Week: The Blood Spattered Bride (1972) 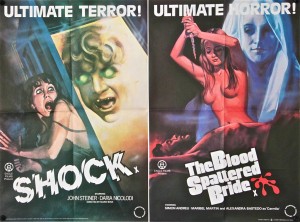 Mirabel Martin (The Bell of Hell) and giallo superstar Simon Andreu are a pair of newlyweds who head back to his family’s ancestral pile to set up house together. However, marital bliss is in short supply for Susan when ‘Husband’ (the only name he’s referred to by) quickly starts to exhibit cruel and sexually sadistic tendencies, revelling in headgames and revealing himself to be an obnoxious bully. This is further exacerbated when she starts to ask questions about the portraits of female ancestors in the cellar, hidden away on account of a Karnstein Curse involving wives murdering their husbands on their wedding nights.

Susan forms an obsession around a dagger once belonging to Mircalla Karnstein, found on her pillow one night. A couple of near-breakdowns later, Husband has the added advantage of being able to label her aberrant behaviour ‘neurotic’. Then, in one of the oddest meetings in screen history, Husband goes to the beach to dispose of the offending dagger only to find ‘Mircalla’ (Alexandra Bastedo), buried so deep in the sand that there’s only a snorkel visible. It must be said that Mirabel and the staff are surprisingly accommodating when he rolls up back at the old Château with a naked girl he just met on the beach.

However, Husband soon finds out that three’s a crowd once Mircalla gets her feet under the table. He becomes persona non grata in his own home, not to mention lower down the food chain, as Susan and Mircalla form a vampire duo. In fact Susan seems much happier in her new unlife as lesbian vampire, and we just can’t have that, can we? After some time, Husband manages to enlist the help of her doctor – said doctor soon lives to regret it. Can our ‘hero’ stay alive long enough to re-establish the male dominant status quo? 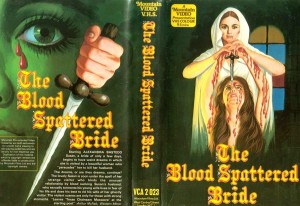 Aranda created a powerful horror film here, and certainly one of the best examples the ‘lesbian vampire’ subgenre. The situation is compelling and all three of the leads are perfect in their roles. It’s interesting to see how Husband is essentially the villain of the piece, when his vampire-hunting role fills the space where a hero would usually be found. The film isn’t an out-an-out gore fest, but doesn’t flinch when it matters – the bloody dream sequence where Susan repeatedly stabs Husband in the chest would be where most of the film’s promotional material found its inspiration. It’s still horrifying. 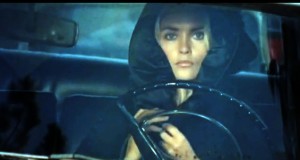 It’s not hard to read from the synopsis that the film is a coded rage against female oppression under the Franco regime, with ‘Husband’ representing the chauvinistic ethos of the state. Bastedo buried in sand, Martin locked in a bird cage, rising up against their oppressor only to have their rebellion stamped on by the male boot. And then there’s the sinister implications of the closing shot.

Of course, it is possible to just enjoy The Blood Spattered Bride as a Bloody Good Horror movie without considering any of this. But it’s even better when you do.