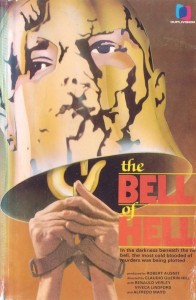 Also known as A Bell from Hell, The Bells, or more properly La campana del infierno, depending on where you live. Whatever you call it, this unique Spanish-French co-production has been imbued with extra mystique and gravitas over the years thanks to the fact that its director, Claudio Guerín Hill, fell to his death from the church tower housing the Bell in question. The film was completed by Juan Antonio Bardem, who had lensed The Corruption of Chris Miller in the previous year. With a screenplay from Chris Miller scribe Santiago Moncada, the result is one of the best of all Spanish horror films.

John (Renaud Verley) is a troubled young man. As the film starts we find him being released from mental institution, where it seems he was interred thanks to the machinations of his corrupt aunt Marta (Viveca Lindfors) in a bid to get her claws into his late mother’s estate. He arrives back in town at the same time as a new bell for the church tower. Quitting a job in the local slaughterhouse after a day because, as he ominously states, he’s “learned enough”, he sets his sights 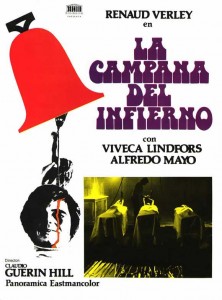 firmly on revenging himself on Marta and her three daughters, at the same time making an enemy of Don Pedro (Alfredo Mayo), initially by having a bit of macabre fun at his wife’s expense. Who will have the last laugh?

That’s the basic synopsis, but it doesn’t come close to expressing the stylish and unusual atmosphere of this uncanny tale. It has a definite arthouse feel about it, and you never quite know where it’s going to go next. It’s close to the bone at times, too, with a shocking early scene featuring John helping out with the business of the day in a real abattoir. John makes for a fascinating main character, the charismatic hero/villain ‘rebel’ figure seen so often in early seventies cinema, and Verley gives the role everything he’s got. Lindfors, probably best known for her part in the ‘Father’s Day’ segment of 1982’s Creepshow, is also great in the role of his formidable aunt. 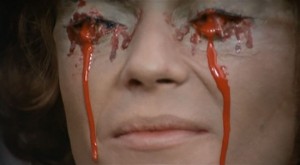 As we’ll see with many Spanish horror films from the time of the fascistic Franco regime (1939-78), the makers were using fiction to guardedly speak out against the oppressor, with monsters and madmen as metaphors for the rot and insanity at the heart of the state. From this misery many things of dark beauty were created, and Bell of Hell rings loudly amongst the best of these.