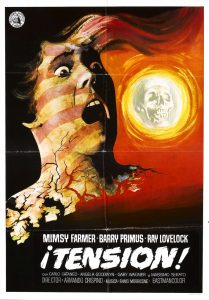 The opening credits of this Italian shocker from Armando Crispino have barely rolled when we witness a rash of terrifying random suicides, an epidemic believed to be caused by MACCHIE SOLARI (the film’s original title). That’s ‘Sunspots’ to you and me. Troubled morgue placement student Simona (Mimsy Farmer of FOUR FLIES ON GREY VELVET) is confronted nightly with the bloody end results of these. After experiencing a terrifying hallucination in the morgue, she meets Betty, who seems to be romantically involved with Simona’s ageing, roister-doistering playboy father, Lello (Carlo Cattaneo). The next morning Betty is found on the beach with her brains blown out, an apparent suicide. After the building attendant meets a similar fate, it appears that someone is taking advantage of this sunspot suicide outbreak as a handy cover for a few well-placed murders – but who, and why? And how are Betty’s brother Father Lenox (USTV actor Barry Primus), ostensibly there to bring the murderer of his sister to justice, and her boyfriend Riccardo (Eurocult legend Ray Lovelock) involved?

You really do wonder what you’ve let yourself for when this one kicks off. First there’s the freaky opening montage, pulling no punches as it depicts the suicides to the terrifying strains of Ennio Morricone’s score, interspersed with stock scientific footage of sunspots. Then we’re down in the morgue with Simona, talking to a colleague as they casually handle internal organs. The hallucination sequence starts up, with the naked corpses turning around to leer at Simona, before standing up and walking, one gruesome pair even to starting to hump each other. Phew. Then, not long after, the horribly mutilated face of the girl on the slab is incredibly disturbing, upsetting even. Can we possibly endure the next hour and a half without losing our lunches or even turning to suicide ourselves? 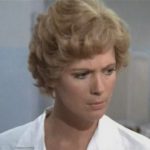 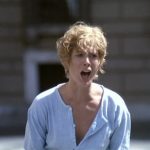 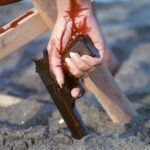 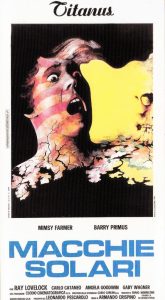 Well, yes, easily as it happens, because as we get further into the plot, the film soon settles down into almost cozily familiar giallo territory, with Simona and Lenox becoming the amateur sleuths out to solve the mystery. True to subgenre form, both can be suspected throughout the film, along with Riccardo and everybody else, of course. Far from being the focus of the film that the export title suggests, we hardly revisit the morgue after these early scenes, instead enjoying plenty of gorgeous location shooting in Rome. Despite being bleached in sun and backed by blue skies, all the familiar landmarks take on darker connotations here, becoming sites of unease rather than jet-setting pleasure, thanks largely to Daniele Alabiso’s (NIGHTMARE CITY) editing and Morricone’s chilling music, reminiscent of his work for 1971’s SHORT NIGHT OF GLASS DOLLS.

Sex and death are inextricably linked as the summer heat bears down on this cracked vision of Rome. “You get your kicks from this stuff?” asks Betty, on seeing a selection of horrifying medical photos of suicide and murder aftermaths that Simona has spread across her coffee table. There are the aforementioned humping corpses, of course, not to mention Simona’s slimy morgue colleague, who likes to let his hands wander a bit too freely around those corpses, but still isn’t averse to some attempted live woman rape – causing to Simona to snap and reveal her own murderous potential, stabbing the jerk repeatedly, only stopped by the intervention of Riccardo. 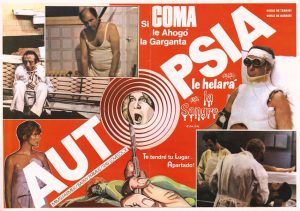 Here as elsewhere, Farmer has a cold, distanced, even slightly psychotic air about her throughout the film. That’s why she’s so brilliant. She’s a completely unique screen presence, in possession of an almost Bowie-esque androgyny and bringing a fresh and slightly odd quality to every film she graces. And talking about your sites of vague unease, we’re first introduced to LIVING DEAD AT THE MANCHESTER MORGUE star Lovelock lying on morgue slab pretending to be dead as a practical joke (if this were a FRIDAY THE 13TH movie he’d be one of the first to go), and Primus comes across as just plain weird throughout. The ‘racing-driver-turned-priest’ shtick just isn’t convincing at all.

AUTOPSY is another one of those strange transmissions from deep in the heart of the Eurohorror vortex. It’s not the ultimate Mimsy Movie – that honour goes to the previous year’s PERFUME OF THE LADY IN BLACK – but it’ll certainly make you sit up and pay attention, whether you love or hate it.