Eurohorror of the Week: Anthropophagous: The Beast (1980)

Synopsis:
A group of friends on an island-hopping holiday in Greece are joined by a fellow traveller, Julie, played by Tisa Farrow. Embarking on a boat trip to their first stop, one of the group, Carol, played by Zora Kerova, receives a message of foreboding doom and death in a tarot reading; a warning her fellow passengers choose to ignore. 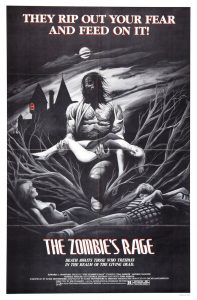 Unperturbed, the group finally land on their first island stop and begin exploring, only to find a small village of whitewashed houses completely empty, save for a mysterious old woman who disappears as soon as she is noticed.

Returning to their boat, the travellers find it adrift and floating out to sea. With a storm threatening on the horizon, they find a suitably abandoned building in which to seek shelter for the night. However, while exploring the cavernous basement of their adopted abode, Julie discovers a blind girl, Rita, played by Margaret Mazzantini, hiding in a vat of red wine. She screams in hysterics, talking of a man who “smells of blood”. Unsurprisingly, the group pay no heed to Rita’s warnings, and begin separating themselves from each other as characters in Italian exploitation films are wont to do.

As the group are picked off one by one in increasingly horrendous ways, Julie and the remaining travellers seek to discover the mystery of the deserted island, and who, or what, is hiding out in the woods, watching them, with a hunger for human flesh. 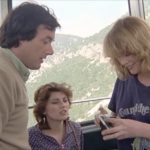 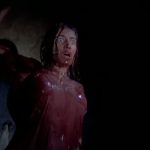 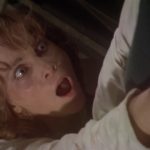 Anthropophagous is a hallmark of B-movie cinema from this era. It has everything you might expect: over the top gore and violence and gleefully sadistic set-pieces, but also substandard sound editing, unconventional cinematography, and mirth-inducing dialogue.

It stars George Eastman as the film’s disfigured antagonist; a towering, shuffling, cannibalistic lunatic with piercing eyes and suitably vacant expression. Eastman (real name Luigi Montefiore) was a long-time collaborator with d’Amato, taking up the part of co-writer on this film, as well as its star (for want of a better word).

Despite the deficiencies that are inevitable in a low-budget Italian film desperately trying to get a piece of the American grindhouse market in the early ‘80s, what Anthropophagous does right, it does well. Few punches are pulled in terms of the film’s violent set-pieces, which include throat rippings, flesh munching and, most notoriously of all, a rather upsetting scene in which a heavily pregnant woman is attacked before having her foetus pulled out and eaten by Eastman’s beast.

Chase scenes, particularly Rita and Julie’s fleeing from the beast towards the end of the film, are effective and genuinely tense. A perfect example is the climactic showdown at the film’s close, as Julie finds herself tethered to the beast while hanging from a rope suspended down a deep well. What follows is a gripping chase as Julie attempts to climb to safety, the beast in hot pursuit behind her. The scene – and the film – ends with the beast finally meeting his demise as an axe is driven into his gut: not before he falls to his knees, pulls his own intestines out of his wound and begins chomping on them. 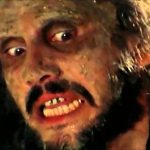 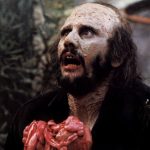 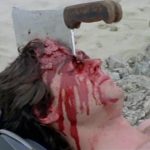 It’s not difficult to perceive just why Anthropophagous received such bad press in the UK when it was released uncut on home video in the early ‘80s: indeed, certain reports in the media had it labelled as a genuine snuff movie. However, despite the aforementioned gore and violence, the film gains a lot from its having been filmed on a beautiful Greek island, complete with stone white houses, luscious woodland and beautiful coastal scenery. Just like Nico Mastorakis’s Island of Death (1976) – also a video nasty – Anthropophagous benefits from the natural beauty of its Mediterranean setting. However, this is indeed juxtaposed with more gruesome, violent scenes, which are shot mostly in darkness and retain that gritty, downbeat sense of dread synonymous with films of this kind.

In terms of performances, there isn’t much to write home about, although the cast list is typical of an Italian exploitation film. Eastman worked with the greats throughout his career, including Ruggero Deodato and Mario and Lamberto Bava. Anthropophagous also stars Zora Kerova, who appeared in Umberto Lenzi’s Cannibal Ferox (1981) and Lucio Fulci’s New York Ripper (1982), and Tisa Farrow, who starred in Fulci’s Zombi 2 (1979) and Antonio Margheriti’s The Last Hunter (1980) with David Warbeck. The cast essentially do what is asked of them, and unsurprisingly there are no real standouts. Much of the dialogue and script is clumsy and often unintentionally funny, as characters do and say things that go beyond what might be considered basic logic. 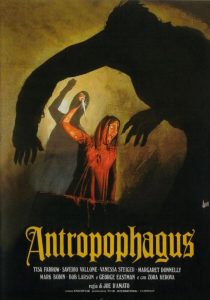 However, as far as Euro horror from this period goes, Anthropophagous is unique and certainly has enough material to keep its audience entertained. D’Amato succeeds in building an effectively tense and eerie atmosphere, and had clearly learned a lot from the Giallo and slasher motifs that were established in the previous decade. This is topped off with a typically warbling, synthesised soundtrack that merely adds to the film’s glorious trashiness.

As is the case with many of the films banned during the brief period of video hysteria in the early ‘80s, Anthropophagous would likely have been largely forgotten had it not been etched in the minds of the horror fan populace as one of the most vilified and notorious titles available on video rental shelves. As previously mentioned, Anthropophagous: The Beast fell foul of the UK ‘video nasty’ scandal in 1983, was prosecuted under the Obscene Publications Act and banned. It remained unavailable in the UK until it received a BBFC classification under the title The Grim Reaper following heavy cuts in 2002. The film was unavailable uncut until 2015, when it was remastered and rereleased in all its uncensored glory courtesy of 88 Films, giving d’Amato and Eastman the recognition they arguably deserve.