Made and released at the very height of Italian splatter mania, this sick puppy from the infamous Aristide ‘Joe D’Amato’ Massaccesi is known variously as MONSTER HUNTER (US), HORRIBLE (France), ANTHROPOPHAGOUS 2 (Germany), and even ZOMBIE 6: MONSTER HUNTER (also US), amongst other things. All of which being slightly more exciting than original Italian title ROSSO SANGUE (‘Blood Red’). In the UK it was released as ABSURD, and was banned under that title in the unquestionably Absurd ‘Video Nasties’ hoo-hah of the period. 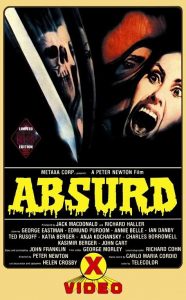 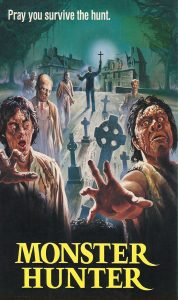 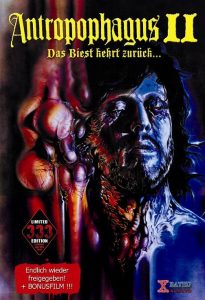 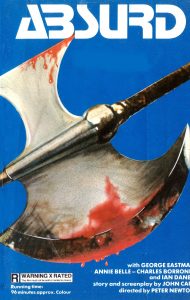 It’s a micro-budgeted, mean-assed, and derivative affair, but not without some grotty charm of its own. As the German title suggests, it’s intended as a sort of psuedo-sequel to D’Amato’s even-more-shocking ANTHROPOPHAGOUS (US: THE GRIM REAPER, 1980), but seems to take its cues more from HALLOWEEN (1978) than anything else.

ANTHRO antagonist Luigi ‘George Eastman’ Montefiori returns, minus monster make-up this time, as a seemingly invincible psychopath from Greece, with fellow countryman and avenging priest  Edmund Purdom in hot pursuit. Well, as ‘hot’ as the advancing years and failing health of the
faded Hollywood star will allow him, in any case. Why exactly the hulking brute needs to run away from the guy at all is a moot point, but in doing so he manages to disembowel himself on the spiked  gate-toppings of the well-to-do Bennett family’s home. Which was pretty much the state we left him in at the end of ANTHROPOPHAGOUS.

No sooner is he rushed off to hospital for an emergency op than we find him rising up from the table, fully regenerated, and despatching anyone unfortunate enough to cross his path in a range of gruesome fashions. Heads are band-sawed, drilled, split with pick-axes, and stuck into burning hot ovens. The final showdown takes place back at the Bennett family villa, where bed-ridden Katia (Katya Berger) and pre-ten child Willy (Kasimir Berger – they were both stepchildren of late Eurocult legend William Berger) are in the most obvious peril. Can our valiant priest and all three of the local cops save them in time?

It has to be said that a big guy running around in jeans and trainers is hardly the most creative or visually interesting of movie monsters, especially compared to the likes of Leatherface or Pinhead, but Eastman remains a threatening figure. The film is cheap, and looks it, but D’Amato gets good use out of the Lazio villa representing the Bennett residence, even if he’s fooling no-one with the alleged American setting. 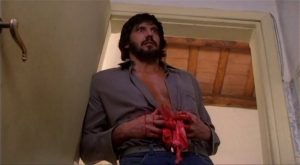 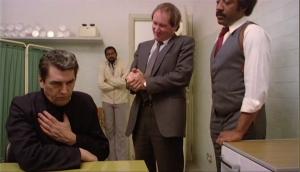 The murders are rendered in enough loving, splattery detail to keep any rabid gorehound happy (hence the ban) and patient viewers will find that the last half-hour builds up one mean head of suspense. Although made in ’81, the film still has a definite seventies-land vibe, so if you enjoy this kind of thing there’s no small amount of fun to be had from seeing some chintzy décor and fashions, and glamorous young women happily married to boring, out-of-shape, middle-aged farts.

ABSURD is a nasty, brutal affair all right, but today it’s hard to credit that it was illegal to buy, sell, or own in the UK. Despite a marked improvement in the acting department, it lacks the brutal, foetus-munching punch of D’Amato’s previous film – a tough act to follow in the nastiness department, to be fair. But it’s still the kind of film that your mama warned you about! 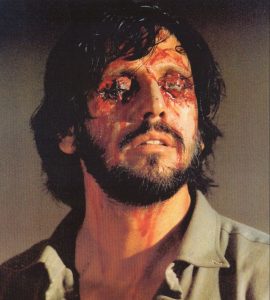 Purdom was doing the Italian exploitation rounds by that time, also appearing in D’Amato’s CONAN rip ATOR, THE FIGHTING EAGLE (1982) and Sergio Martino’s 2019: AFTER THE FALL OF NEW YORK (1983), with the latter also including Eastman in its cast. Also look out for a rare on-screen appearance by legendary dubbing artiste Ted Rusoff as the surgeon – if you’ve seen pretty much ANY other Italian genre film, then you’ll have heard his distinctive tones.

Its ‘Video Nasty’ status has ensured that ABSURD has remained one D’Amato’s best-known films, and it’s finally back on UK shelves thanks to a spiffy new Blu-ray from 88Films – with no risk of paying a fine or doing porridge for your trouble.