Eurohorror of the Week: Zombie Holocaust (1980)

What do get when you combine Zombie Flesh Eaters with Cannibal Holocaust? Zombie Holocaust, that’s what. 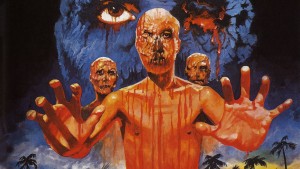 Well, sort of. When Italian producer Fabrizio De Angels had a hit on his hands with Fulci’s famous undead offering, he wasted no time in pulling together another horror project. Fulci otherwise engaged, De Angelis brought in veteran director Marino Girolami, the father of original Inglorious Bastards director Enzo G. Castellari. Ironically, Enzo had turned down the job of directing Zombie Flesh Eaters when offered it. To suggest some kind of continuity between the two films, ZFE’s star Ian McCulloch was brought on board to play almost exactly the same role, along with Peruvian actor Dakar and a few of the earlier film’s sets.

A New York hospital is plagued by a series of corpse mutilations, which are eventually found to be the work of an orderly. Seems that hacking limbs from corpses and eating them is a native ritual on the Asiatic island from which he sires. Luckily, morgue assistant Lori (Alexandra Delli Colli) is not only an expert on anthropology but also grew up on Kito, the very island in question, and hence is given leave to jet off for an expedition into the jungle with the help of investigating doctor Peter Chandler (McCulloch).

No sooner have they arrived on the island and announced their presence to local bigwig Dr. Obrero (Donald O’Brien) than their party is set upon and decimated by a tribe of particularly bloodthirsty cannibals. However, while fighting to survive this cannibal onslaught, Lori and Peter discover that there’s an even more deadly threat on the island in the form of a handful of groaning zombies who don’t seem to eat flesh, but scare the willies out of the locals nonetheless. Could it be that the good Dr. Obrero knows a good deal more about all this than he’s led them to think? 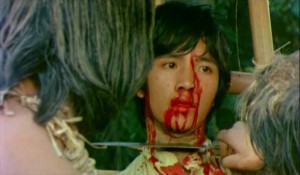 Zombie Holocaust may never win an award for, well, anything, but it certainly delivers the gory goods. With the zombies consigned to the background for the most part, it’s left to the cannibals to create carnage; and that they most certainly do, with booby-traps, throat slittings, eye gouges and entrails strewn about, all capped off with extreme close ups of them gratefully chowing down on still-spurting human organs. Despite all this, the film seems to lack the cruelty of Cannibal Holocaust and Ferox. It may be simply because Girolami’s direction is so old school and pedestrian, but this is more like some Boy’s Own jungle adventure gone horribly wrong.

The uncut version of this seemed like some dangerous forbidden fruit back in the ‘Video Nasties’ period and the ultra-censored era that ended around the same time that DVD emerged. Today some of its grungy goodness is diminished, partly because the effects are somewhat dated, but also because their shortcomings are far easier to see on Blu-ray remasters than they were on grainy old second gen VHS tapes. And there’s nothing like the thrill of watching something that you think you’re not allowed to. 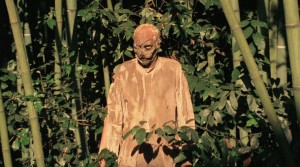 That said, ZH still enjoys a rabid cult following, albeit as Zombie Flesh Eaters’ hard up little brother. ‘Trash’ it may be, but it delivers on what it promises and still has the power to shock 36 years later. How many modern horror films could you say that about?