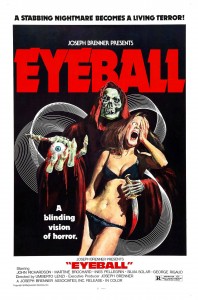 Although director Umberto Lenzi initially entered the consciousnesses of most UK and US horror heads via 1981’s notorious ‘nasty’ Cannibal Ferox (1981), he’d been churning films out at an average of three or four a year since the late fifties, across all kinds of genre, from spy films, westerns and peplum fantasies, to ultra-violent cop thrillers and sleazy gialli like the delirious Spasmo (1974) and this little sucker. While describing Eyeball as ‘good’ might be a bit of a stretch, there’s still plenty of throwaway retro fun to be had. It’s original title ‘Gatti rossi in un labirinto di vetro’ translates as ‘Red Cats in a Glass Maze’!

The film finds a busload of ‘American’ tourists on a package sight-seeing holiday in Barcelona and its environs, only to have the younger and prettier females of their number (natch) dispatched one-by-one by an unknown, red gloved killer, whose M.O includes the removal of the left eye of each victim. As ever, the assemblage includes the usual bunch of ‘oddballs’ for suspects; a glam wife married to an older guy who can’t take his eyes off teenage girls, an older guy travelling with his bored teenage daughter, a priest (also natch), and, yes, a pair of horny lesbians. Oh, the Godlessness, the outrage of it all. What, oh what is the world coming to? 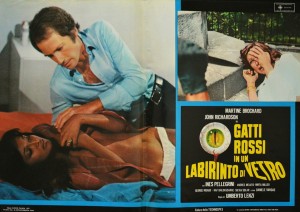 However, emerging from this cannon fodder as lead characters are John Richardson (of Black Sunday and Torso sort-of-fame) and his potential mistress Martine Brochard. Turns out that the former’s estranged wife was last seen back Stateside unconscious by a swimming pool with a disembodied, bloody peeper in her vicinity – could it be that she’s followed him to Spain to go on this killing spree? Will they find the answers before the killer gets to them? Will John get it together with Martine? Will the local police inspector get to close the case before he retires in two days? Does the rain in Spain fall mainly on the plain? Do we really give a toss, or are we busy enough just enjoying a garish holiday in mid-seventies Barcelona by proxy with this bunch of Eyeball oddballs?

So, yes, something of a squalid melodrama, perhaps, and a hack job from Lenzi, but one with enough giallo clichés and retro junk culture appeal to make it a highly enjoyable one. It has a catchy, if slightly over-used, main theme by Bruno Nicolai, and is of note for being bloodier than many entries in the genre, looking forward to the excesses of the early eighties. There’s too much travelogue stuff, an abundance of dumb-ass dialogue, and it’s rather amusing how the remainder of the group still seem determined to enjoy their holiday as one after another of them is horribly murdered.

However, one suspects that if an upcoming young director were to make this film today, in the exact same way to the very last detail, they’d probably be hailed as a genius for their wit, irony, and unparalleled cine-literacy.