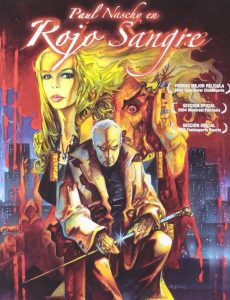 Late, great Spanish genre icon Paul Naschy may have made a few more movies before his passing in 2009, but if any one of his late-period films has the feeling of being his true ‘swan song’ then surely ROJO SANGRE (‘Blood Red’) is it. With a script penned by Naschy himself, as ever under his partial real name of Jacinto Molina, the debut feature from director Christian Molina (no relation) could well be the most deeply personal work of the star’s entire career. It’s an absolute must-see for any fan of this horror legend and a real revelation for anyone who’s never much rated the ‘Spanish Lon Chaney’ for his acting chops.

After a title montage includes stills of Naschy, made-up as some of his best-known horror roles of his seventies heyday, we find the great man in the role of struggling septuagenarian actor Pablo Thevenet, attending a series of humiliating auditions for obnoxious young filmmakers that couldn’t give two shits about his illustrious past and aren’t afraid to let him know. The title sequence has tipped us off that Naschy is playing ‘himself’ to a degree here – and it’s immediately engrossing, particularly for long-time fans.

Unable to find work and seeing vacuous, worthless celebrities fêted everywhere he looks (as, sigh, do we all), the man’s rage and frustration have long since reached boiling point. Compounding this, we also learn that his daughter was murdered some time ago. Thevenet’s lazy-ass agent is all set to dump him but throws him a crumb in the form of an acting gig at The Pandora, an ultra-decadent nightspot for rich weirdoes owned by one Mr Reficul (Miguel del Arco). If alarm bells aren’t ringing already, just read that name backwards. 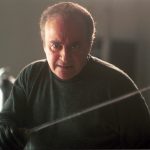 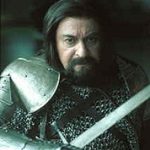 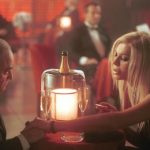 Said gig sees the stony-broke-and-desperate Thevenet paid ten thousand euros a week to greet the club’s the oily revellers, decked out in the roles of such celebrated murderers of yesteryear as Rasputin, Gilles de Rais and Jack the Ripper. Reficul also gifts the actor a wolf-headed cane, with a concealed blade of Japanese steel. It’s around this point that Thevenet snaps. Suddenly he’s donning those murderous mantles out of hours and putting that blade to good use on the sources of his pain; meaning bad news for any bollock-brained celebrity couples or treacherous former collaborators that have pissed him off lately.

At face value, ROJO SANGRE seems at least in part to be Naschy’s answer to the Douglas Hickox/Vincent Price classic THEATRE OF BLOOD (1973) but it resonates too strongly to be boiled down to that alone. Price was of course far from a forgotten actor when he appeared in that film: here Naschy is a struggling veteran actor playing a struggling veteran actor (he still isn’t well-known in his own country), whose past glories are remembered by few in the post-millennial age. His performance is sublime, as though he is literally acting for his life. With young director Molina as his muse, he’s putting his private hell up on screen for us to see, in a last-ditch quest for celluloid redemption. 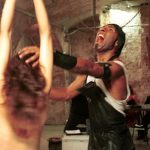 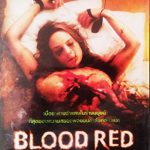 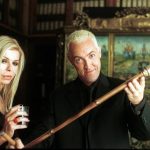 First-timer Molina handles things with undeniable flair, segueing his scenes with stylish match cuts, carrying us along on cigar smoke, never giving us a second to look away. Fourteen years on it’s still a very modern-feeling film, and a very different proposition to Naschy’s seventies/eighties output. What ropey low-budget 2004 CGI we have is thankfully used sparingly.

While we have Thevenet perpetrating some nicely gory murders, the most genuinely unsettling sequence comes further in his journey into the heart of darkness when he’s offered another part – in a snuff movie. The Grand Guignol of the actor’s past glories here comes face to face with something resembling sickening real-life horror, and it’s here we know there’s no turning back from his descent into hell. He agrees to take the gig, being now a fully-paid-up murderer anyway, but coming face to face with a warped lowlife torturing a victim that reminds him of his late daughter is a bridge too far. Let’s just say that the makers of this particular ‘film’ soon regret kitting Thevenet out with a real loaded firearm. 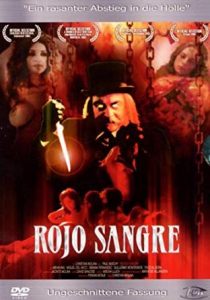 Part fun horror flick, part reflection on the vacuity of mass culture (and in particular the ‘cult of youth’), and part elegy for an amazing career in the genre, ROJO SANGRE is worth your time whether you’re a devotee of Naschy’s ‘Golden Age of Spanish Horror’ output or not. And where else can you find a scene where old-time icon of horror teases a fellow auditioning actor that he gets his kicks from shoving live mice stuffed in condoms up his butt? Nowhere, that’s where.